The press watchdog has rejected a complaint by a traffic warden over a photograph of him taken from a regional daily’s office.

Kit Johnston complained to the Independent Press Standards Organisation over the picture of him issuing a fine to a coach driver outside the office of the Grimsby Telegraph, claiming it had breached his privacy.

The Telegraph interviewed the coach driver concerned, reporting he had been fined “for parking inches over the white line” of a coach only parking bay at the nearby Grimsby Fishing Heritage Centre.

Staff from the centre had told the newspaper that “the space is free to park in for coaches, and that a fine should only be issued if the vehicle isn’t parked correctly in the space”. 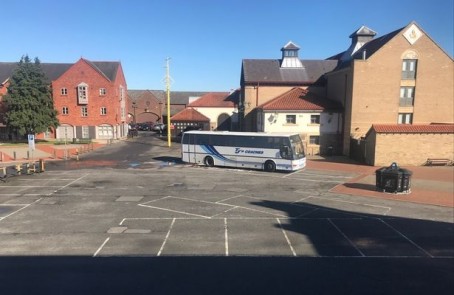 A view of the coach from the Telegraph’s office

Complaining to IPSO under Clause 1 (Accuracy), Clause 2 (Privacy) and Clause 3 (Harassment) of the Editors’ Code of Practice, Mr Johnston said the ticket had not been issued for parking outside the bay, but for being parked in a car park without clearly displaying a valid pay and display ticket.

He added that the photo of him issuing the ticket by the coach, which featured on the homepage of the Telegraph’s website and on social media, had led to him feeling harassed on social media and at work because people were able to recognise him.

Denying a breach of Code, the Telegraph said its office overlooked the car park and as such staff were aware that it was free for coaches to park there, adding that front of house staff at the heritage centre confirmed prior to publication that parking was free for coaches and the only reason a parking ticket would be issued is due to a vehicle not being parked correctly in the bay.

North East Lincolnshire Council also sent a comment to the newspaper post-publication which said the authority sympathised with the driver, and that if he felt he had been incorrectly issued with a ticket, he should formally challenge the decision, and provided details of how he may do this.

The Telegraph added that the photograph was taken while Mr Johnston was in a public car park, doing his job, and in these circumstances they did not accept that he had a reasonable expectation of privacy.

Furthermore, the paper said that the photograph did not show anything private about Mr Johnston, as the image was blurry and he was wearing a hat and dark glasses.

However, it did offer to publish a correction after becoming aware during the complaints process of the actual reason for the ticket being issued.

IPSO found there had been no failure to take care over the accuracy of the initial claim for the ticket being issued, but said the correction should now be published in order top avoid a breach of Code.

It also found Mr Johnston did not have a reasonable expectation of privacy in these circumstances, and the photograph did not reveal anything private about him.