An industry chief who is also a Conservative councillor has criticised Downing Street’s decision to exclude a daily newspaper from a Theresa May press conference.

Scottish Newspaper Society director John McLellan says it was “unacceptable and unhelpful” to deny pro-Scottish independence daily The National from covering a conference held by the Prime Minister on Wednesday.

As reported by HTFP on Thursday, the incident prompted The National to run a dramatic front page showing Mrs May’s silhouette above a dummy two-deck headline, with some words explaining why it had refused to cover the visit.

In a follow-up splash on Friday, pictured, the Glasgow-based newspaper accused Mrs May of “running scared”. 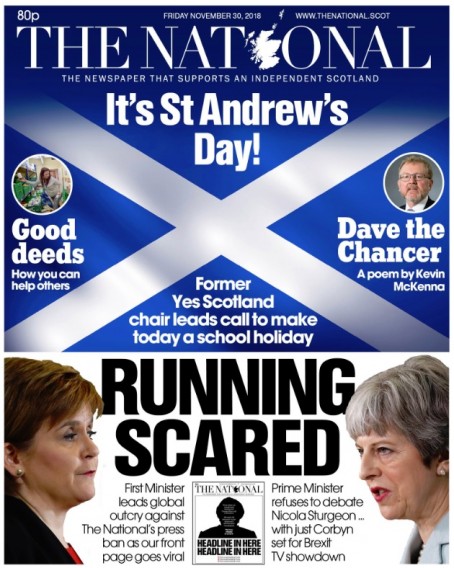 Former Scotsman editor John, now a sitting Tory councillor on Edinburgh City Council, has admitted Number 10’s decision was “a mistake” in a column for his former paper.

He wrote: “The National, the independence-supporting paper apparently excluded from a news conference during the Prime Minister’s flying Scottish visit this week by the Downing Street press team because of space constraints, isn’t everyone’s cup of tea.

“And it wasn’t alone in facing difficulties with the event at the Bridge of Weir Leather Company on Wednesday. At one point, even the Press Association wasn’t sure it was invited, so the media management left something to be desired generally.

“Not that Downing Street gives two hoots what I think, but as director of the newspaper trade association which includes The National and also one of Mrs May’s council foot soldiers, excluding publications on the basis of their politics is both unacceptable and unhelpful to the cause.

“As they say in the Civil Service, happy to discuss.”