I’m a former regional daily journalist… get me out of here! 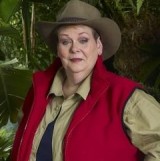 A former regional daily journalist is set to appear on the new series of reality TV show I’m a Celebrity… Get Me Out Of Here!

Anne Hegerty, who worked on the South Wales Argus for three years, has been announced as one of the entrants to the jungle on the ITV programme.

She is now better known on quiz show The Chase, in which she appear as a ‘Chaser’ who attempts to prevent contestants from winning a cash prize.

Anne, pictured, worked on the Newport-based Argus in the early 1980s as both a news reporter and features writer.

While on the newspaper, she spent nine months working from the town of Ebbw Vale.

Anne later moved to Manchester before finding fame with The Chase, on which she has appeared since 2010.

Of her decision to enter the jungle, she told PA: “I have always refused to do sugar-free diets but this is part of the deal and so let’s go for it. I was the world’s worst Brownie and Girl Guide and I never did camping.

“I am pretty sedentary and I spend most of my time sitting on my bum reading things on the internet. It will do me good to have to exercise a little bit more.”

I’m A Celebrity… Get Me Out Of Here! begins this Sunday on ITV.