Hyperlocal publishers have united with the North of England’s biggest newspapers in calling for change after rail chaos hit the region.

More than 11,500 have signed a petition set up by the publishers calling on Theresa May to act on the problems caused by hundreds of Northern Rail services being delayed or cancelled since timetable changes were introduced. 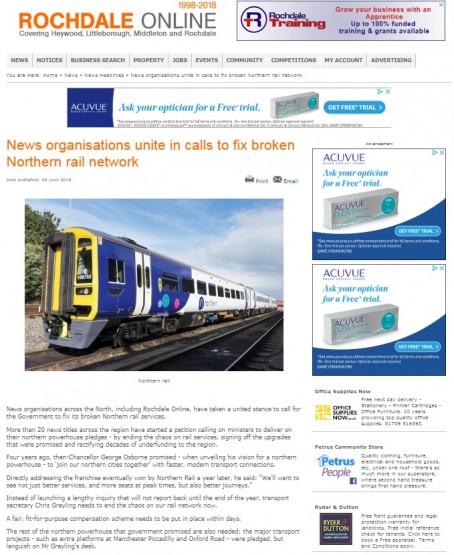 Six of the titles are members of the Independent Community News Network, a trade body for hyperlocal publishers set up by Cardiff University’s Centre for Community Journalism.

ICNN director Emma Meese told HTFP: “[The issue] was relevant to all publishers in the North. Now, in a digital era, hyperlocal have equal leverage when it comes to influencing local, regional and national politics.

“Campaigns like this are the bread and butter of local journalism and this is a great example of how collaboration can work and achieve positive change.”

Emma added: “We believe in the value of local news. We believe it contributes to maintaining a sense of community and supporting healthy democratic engagement.

“Digital technologies have allowed communities to redefine the role of news in local areas. That applies to us all. The question is, what do we do about it?

“This collaboration goes some way in addressing that question and we welcome the chance to share the opportunity, and any more that follow as a result, with our members.”