HTFP reported in August how the North Devon Journal and its sister website Devon Live had launched the We Want It Now campaign, after two car crashes in as many days on the North Devon link road left four people dead.

Three children were among the victims after the two crashes on the A361, which connects the M5 motorway with Barnstaple and the North Devon coast.

More than 2,500 people signed the Journal’s petition on the subject within 48 hours of the campaign’s launch, and now Transport Secretary Chris Grayling has approved a series of works to the road in order to better connect North Devon to the rest of the country. 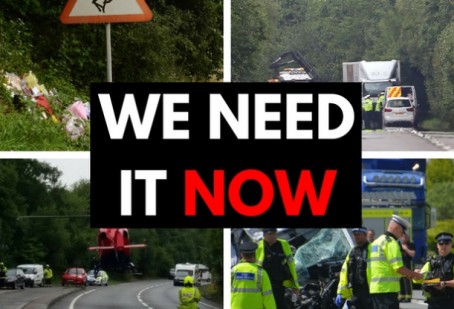 A further £10m for the project will come from Devon County Council’s Highways department.

Devon Live editor Patrick Phelvin told HTFP: “Thirty years ago this road was built on the cheap to the detriment of the Devon economy and the safety of those who use it.

“Although the need for improvements was recognised a long time ago there was no timetable for them.

“Last summer’s tragic deaths focused minds and if DevonLive.com’s coverage has brought an added sense of urgency to proceedings then that’s fantastic.

“However, the real work has been done by local politicians who have spent decades patiently campaigned on this issue. The team here will continue to press for the work to be done without further delay.”