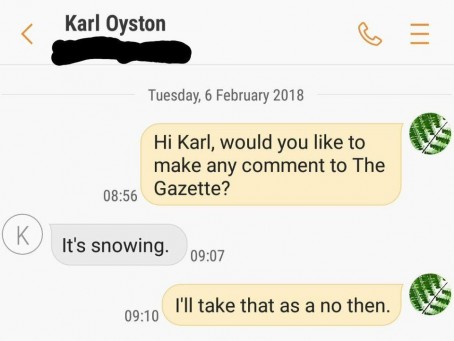 It may not be the most likely career move, but Blackpool daily The Gazette seems to have found a new weatherman in the form of sacked Blackpool Football Club chairman Karl Oyston.

Gazette football writer Matt Scrafton posted the above exchange of text messages with Mr Oyston on Twitter after attempting to reach him for a comment following the latest round of turmoil at the troubled club.

In recent days, Mr Oyston’s mother Vicki has also resigned as a director at the club, while Natalie Christopher, a daughter of her husband Owen from another relationship, has taken up the chairmanship.

Mr Oyston infamously banned The Gazette in 2015 saying he viewed the paper as a “competitor” to the club’s in-house news channel.