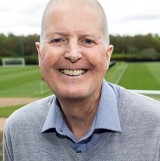 A former regional sports journalist who went on to work for national titles has died aged 62 after a cancer fight.

Figures from the world of football have paid tribute to Ralph Ellis, who worked for the Western Daily Press and Birmingham Evening Mail in a career which lasted more than 40 years.

He later became chief football writer on the Daily Star and worked on a number of national titles, as well as spending time as commercial and marketing director for Bristol Rovers Football Club.

Up until recently Ralph still worked for the Mirror as a football reporter and the Daily Mail in London, but he had battled prostate cancer and died on Saturday.

Former Queens Park Rangers manager Ian Holloway said: “I’ve spent many a happy hour in his company. I’m absolutely devastated. He was a football man through and through.

“I’ve been great friends with Ralph for a long, long time. When I first got into the Bristol Rovers team, he did my very first interview. He was a genuine guy who loved his football.”

Middlesbrough manager Tony Pulis added: “Ralph was a fantastic man. I have tremendous respect for him. He was an old school journalist, who you could trust.

“He would write what he believed but would respect your opinion at the same time. I found him to be a really good football man. It’s sad news.”

And former Wales national team boss Bobby Gould said: “We actually got off to a bad start but went on to become friends over the years.

“It’s quite amazing how our paths crossed and we grew to become really appreciative of each other. News of his death has hit me badly. I’m an emotional person anyway but this is really sad news.”