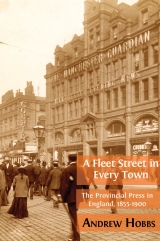 A former regional press journalist has written a new book about the industry’s “golden age.”

But University of Central Lancashire journalism lecturer Andrew Hobbs isn’t focusing on the era of soaring print circulations and 25pc profit margins before the internet began to eat into newspaper companies’ profits – but a period more than 100 years earlier.

His book A Fleet Street in Every Town: The Provincial Press in England, 1855-1900 examines the importance of local newspapers at the height of the Victorian era in the second half of the 19th century.

Andrew previously worked as a reporter for the Lancashire Evening Post and a sub-editor for various Lancashire dailies and weeklies, and later set up his own alternative title called the Preston Other Paper before going into journalism training.

He told HTFP the book “focuses as much on the readers as on the newspapers, journalists and publishers”.

He said: “I’ve tried to write it in an accessible style so that it appeals to journalists and ex-journalists, as well as academics and people interested in history generally.

“The response so far has been very positive, from the public and from academic readers.

“I think there is a growing awareness among historians that the provincial press is where the action was in the second half of the nineteenth century. They left the London press behind, in terms of sales and readership, and innovation.

“By the end of the century big local papers like the Middlesbrough Gazette sold more copies in one town than The Times did across the whole country. The London dailies sold mainly in the South-East.”