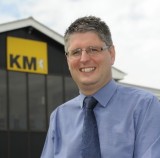 Rebecca Smith, former senior editor for Kent Regional News and Media, and Leo Whitlock, pictured, who edited a number of KM Group weeklies, have been appointed to help pick the winners at this year’s Kent Press & Broadcast Awards.

Entries are now being welcomed for the awards, with 15 categories covering print, broadcast, digital, social media and design up for grabs.

New categories on offer for 2018 include News Website of the Year and Front Page of the Year.

The awards, organised by Maxim PR, will be presented at a ceremony at Kent County Cricket Club, in Canterbury, on Friday 13 July.

It will be hosted by BBC newsreader Simon McCoy who said: “I’m delighted to be hosting the Kent Press & Broadcast Awards as I’m a huge fan of local news publications. My training was on local newspapers and one of my most treasured possessions is a front page of a copy of the Bristol Evening Post, because it has my byline on it.

“In an age of ‘fake’ news, when you see that local newspapers feature on the CV of any applicant, from a journalistic point of view you know they’re a cut above the rest. These days almost every story that we run on TV news has originated in a local newspaper, and in my view, they’ve never been more important than they are today.

“I’d go as far as to say that I believe the Grenfell fire may never have happened if there had been a decent independent local newspaper – but as we now know, all the papers in the area were owned by the council. Never underestimate the difference that good local journalism can make to the people it represents.”

Maxim’s Rachel Knight said: “We are so pleased Simon agreed to host this year’s awards ceremony. Keeping 70 or so journalists under control is no mean feat but I’m sure he’s the man for the job.

“Last year we conducted a survey with the Kent media to make sure we were running the awards in the best way possible. Having a host with a good story to tell proved important to our guests so we’re looking forward to his tales.

“Following the feedback we received, we’ve also made a few changes including expanding the independent judging panel and introducing new categories.

More information on how to enter the awards can be found here.