A former regional journalist has thanked two nurses who save his live after he suffered a heart attack near his home.

Charlie Graves launched an appeal in his old newspaper the Rotherham Advertiser to find the off-duty nurses, who came to his aid when he collapsed in the street last month.

After the Advertiser ran a story about Charlie’s ordeal, readers managed to identify the nurses as Tracy Maher and Jenni Webb.

Charlie, 66, is now recovering and has been able to present Tracy with a bunch of flowers in person to say thank you. 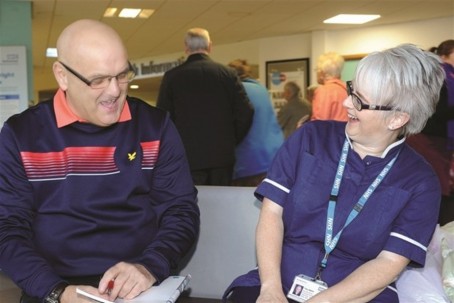 He told his old paper: “They were a token of my appreciation, although nothing could adequately express my thanks for what they did.

“There is no doubt that without their efforts I wouldn’t be here today.”

Clinical nurse specialist Jenni, who was unable to attend the reunion due to illness, was first on the scene after Charlie collapsed near his home in the village of Broom.

She made him as comfortable as possible before phoning for an ambulance, while Tracy arrived later and put her coat around Charlie as they waited.

Tracy then decided to drive Charlie to Rotherham Hospital instead of waiting for an ambulance, after realising the seriousness of his condition.

He was later transferred to Sheffield’s Northern General Hospital, where a stent was fitted to unblock an artery to his heart.

Tracy told the Advertiser: “I didn’t know the outcome until I read the story in the Advertiser.  I’m so relieved everything has turned out okay and Charlie is looking so well.”