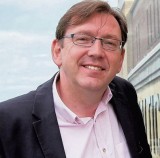 A former regional daily editor has taken up a new role helping to manage the parks of his old patch.

Brian Aitken, left, who edited Newcastle-based daily The Journal for 11 years before leaving in 2014, has been appointed as a founding trustee of the Newcastle Parks Trust.

The Trust is the first purpose-built charity set up to take on an existing portfolio of parks and green spaces across an entire city, after Newcastle City Council realised it could not pay for parks in the future following a 90pc cut to the parks budget since 2010.

The charitable trust will manage 32 parks and more than 60 allotment sites in the city.

The chair, vice-chair and ten trustees have taken on their posts on a voluntary basis and will receive no remuneration from the trust or the council.

Chair Jim Beirne MBE said: “I’m delighted to be taking on the role of chair of this independent charity.

“It’s an exciting new chapter in the City’s history as the parks play a vital role in the social and economic wellbeing of our communities.

“I look forward to working with the trustees, the team, the city and many other stakeholders to take forward this innovative new initiative.”