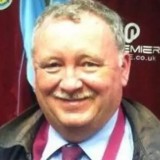 A former regional daily chief reporter and “journalist of the old school” has died aged 65.

Tributes have been paid to Peter O’Keefe, left, who worked on various newspapers in the North-West of England including the Wigan Post and Lancashire Evening Post.

While in Wigan, Peter served in roles including court reporter and chief reporter.

He retired from journalism several years ago.

Wigan Post editor Janet Wilson said: “Peter was a terrific court reporter and a great character to have in the newsroom.

“He was a great help to me and other young reporters when we were starting out. Our condolences go to his family.”

Peter was born in Dublin, to father Eoghan, a civil engineer from Cork, and mother Elsie, who was originally from Burnley.

After the birth of younger brother Eugene, the family moved to England where his youngest brother Terence was born.

The family later settled in Atherton, near Wigan, and Peter began his career on the Atherton Journal before moving on to the Post.

Peter married Susan Charnock in 1974 and they had two children, Cathy and David.

He and his family moved to Ingol, Preston, in 1986 and he and Susan remained in the family home until his death.

Peter’s daughter Catherine and son David said in a joint statement: “Dad was a happy, jolly soul who had been in great spirits, especially recently. He always had a funny anecdote to tell and loved to chat about sport or family.

“He was also interested in politics and history and had an encyclopedic knowledge of dates.

“He loved his time at the Post and made some great friends. He was a journalist of the old school who still used shorthand and never used email in his life. He was also a doting grandad to Abigail, 10, Tom, eight, and Vincent Peter, aged one.”

Peter’s funeral will be held at Preston Crematorium at 12.15pm on Thursday.