A regional daily sports reporter has been named the best football journalist in the region that he serves.

Matt Scrafton, of Blackpool daily The Gazette, was presented with the Football Journalist of the Year prize at the Northwest Football Awards.

The award recognised not only Matt’s coverage of Blackpool FC’s on-field exploits but also his in-depth reporting of the club’s ongoing ownership saga, which has involved court cases and fan protests.

The other finalists were Ciaran Kelly, of the Manchester Evening News, and Marc Iles, of the Bolton News. 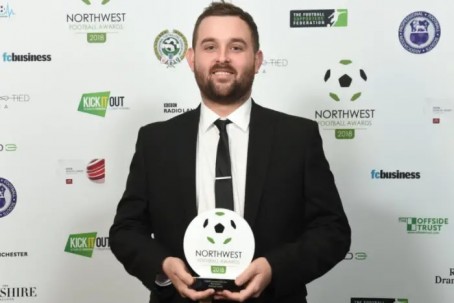 Gazette deputy editor Andy Sykes told HTFP: “Matt is an exceptional journalist and he deserves all the recognition he has received.

“When we employed Matt we specifically wanted someone with a news background to help deal with the sideshows around Blackpool FC as well as the action on the pitch.

“He has done that with aplomb and we’re delighted he has been honoured among some of the best sports journalists in the North West.”

Matt was also highly commended in the Sports Journalist (Print) category at last Thursday’s O2 Media Awards North West, at which the Gazette was awarded the Daily Newspaper prize.