A weekly newspaper has ceased publication after seven years in print – with its five staff now set to be redeployed onto other titles.

The Midland News Association has confirmed the last edition of the Oswestry & Border Chronicle was published yesterday.

The Chronicle was launched as a free title in 2011, in opposition to the then NWN Media-owned Oswestry and Border Counties Advertizer, now owned by Newsquest following its purchase of NWN last year.

Its three editorial and two advertising staff are now likely to be redeployed in other roles across the company, which also publishes the daily Shropshire Star and Express & Star as well as several other weekly titles. 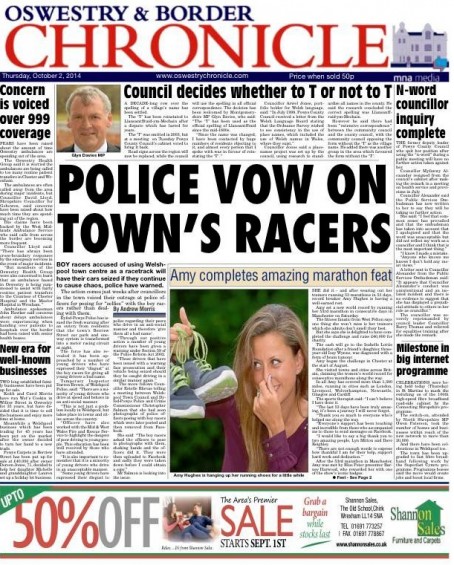 At its launch in 2011, the Chronicle had a free distribution of 15,000 in Oswestry and the surrounding area.

The MNA says it will continue to cover Oswestry in its daily title the Shropshire Star, as well as on its companion website.

Managing director Graeme Clifford said: “The decision to close the title was taken after a review of the MNA’s weekly portfolio.

“We are not looking to make redundancies and hope to redeploy the staff in other roles. We are grateful to colleagues for all their efforts since we launched the Chronicle in 2011.

“We would also like to thank our readers and advertisers for their support.

“The MNA will continue to serve Oswestry and the surrounding area through our daily newspaper the Shropshire Star as well as Shropshirestar.com.”