A museum is to stage an exhibition dedicated to its local newspaper’s 200-year history.

The Westmorland Gazette, which has recorded life in the Lake District since 23 May 1818, is marking its double centenary this year.

Now the Museum of Lakeland Life & Industry in Kendal is dedicating an exhibition to the Newsquest-owned title, opening on 28 April and running until Christmas.

Entitled ‘From Wordsworth to the Web: 200 Years of the Westmorland Gazette,’ the exhibition looks at how legends such as William Wordsworth and Alfred Wainwright had on shaping the newspaper as well as how breaking news has changed in the digital age. 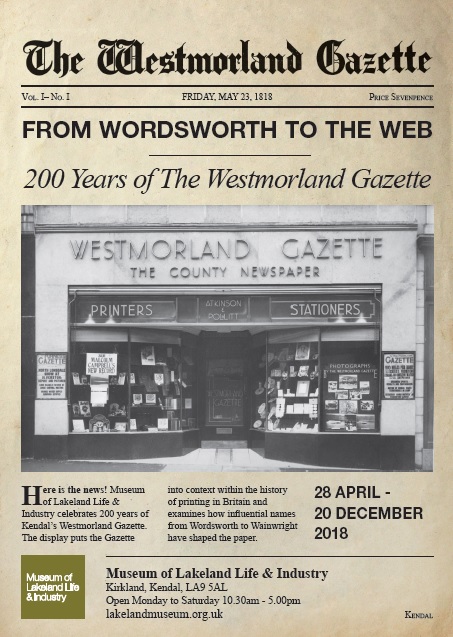 A poster advertising the exhibition which opens next week

Rachel Roberts, curator of Museum of Lakeland Life & Industry, said: “The Westmorland Gazette is as much a way of life in south Cumbria as the fells and the lakes. It’s been a staple in the homes of residents for two centuries, delivering the sensational, serious and sometimes silly stories.

“In an era of digital news, this exhibition celebrates printed prose and also how the Gazette has adapted for the World Wide Web.”

Gazette editor Andrew Thomas said: “2018 promises to be a momentous and memorable year for The Westmorland Gazette.

“We have a range of special publications and events planned, both in-paper and online, to celebrate the newspaper’s important role in the local community over the past two centuries. They include a special 48-page supplement to be published on May 21, which reveals the history of The Westmorland Gazette and how it has reported the news over the past 200 years.

“One of the most important events to mark the anniversary is the exhibition at the Museum of Lakeland Life & Industry.

“We hope as many people as possible will go along to see the exhibition, which will be on display until December 20.”