A retired regional daily editor has raised enough money to buy four new public defibrillators after walking the length of a county’s coastline with his sister.

Terry Hunt, who edited the East Anglian Daily Times for 21 years before retiring last August, raised more than £6,000 after undertaking the four-day walk along the Suffolk coast with Karen Chamberlain.

Terry had a near-death experience earlier this year when he suffered a cardiac attest in the street in Ipswich, but was rescued by a passer-by who was able to use a defibrillator to shock his heart back into action.

Since then, he has been campaigning to get more of the devices installed in public locations. 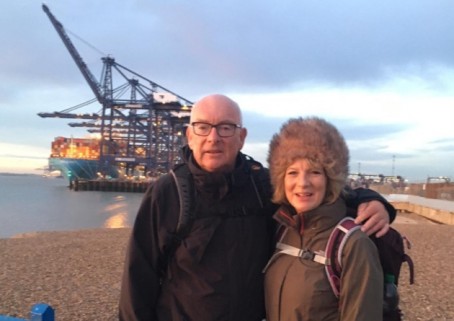 Terry and Karen at Felixstowe, on the end of their walk

More than 130 people and organisations sponsored Terry and Karen to compete their walk from Lowestoft to Felixstowe.

In a piece about his challenge for the EADT, Terry said the walk had been “really enjoyable.”

He added: “Karen and I are both proud to say we had no blisters. In fact, I was so delighted that I sent a photo of my definitely battered but totally unblistered feet to my podiatrist. She was pleased.

“A huge thank you to all the kind people and organisations who have donated money to help us buy more defibrillators. Your generosity has really bowled us over. Your kindness will save lives. Thank you so much.”