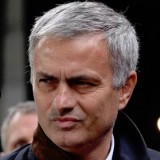 A former regional daily editor sparked a Twitter spat after branding staff at a regional news website “idiots” over their decision to cover the sacking of Manchester United manager Jose Mourinho.

Mike Lowe criticised Gloucestershire Live after the site began running a live blog about the shock departure of  the Portuguese boss, pictured, from the club yesterday morning.

Mike, who edited the site’s Gloucester-based sister print publication The Citizen when it was a daily, took to Twitter to call for Gloucestershire Live to “try a bit of local news” instead of covering the sacking.

But Gloucestershire Live hit back at Mike’s criticism via its official Twitter account, while journalists working for the site also waded into the row.

Responding to a Twitter post by Gloucestershire Live encouraging readers to follow its coverage of the sacking, Mike wrote: “Yes, I’m absolutely certain to follow GlosOnline for the latest Manchester United news instead of the 373 more informed sources I already have at hand. Idiots.”

In turn, the Gloucestershire Live account responded: “‘Idiots’? Charming way to describe our hard-working journalists seeking new ways to engage with people. If you have constructive things to say, why not DM [direct message] us rather than this public insult?”

This in turn prompted a further reponse from Mike, who has also previously served as editor of the Derby Telegraph and Bristol Post and who now edits the Archant-owned Cotswold Life magazine.

He tweeted: “Hard work? Lifting it from [Manchester Evening News chief Manchester United writer] Sam Luckhurst on a sister paper? My, you’d better go for a lie down. ‘Seeking new ways to engage people’? Try a bit of local news.”

Hard work? Lifting it from Sam Luckhurst on a sister paper? My, you'd better go for a lie down. "Seeking new ways to engage people"? Try a bit of local news. https://t.co/QbmK6ZK4Kj

Gloucestershire Live journalists then weighed in with their thoughts on the matter.

Digital content editor Sophie Flowers wrote: “We just don’t think you should say things online that you wouldn’t say to someone’s face Mike. That’s all. You’re more than welcome to come in and say hello to us ‘idiots’ any time.”

Mike, a lifelong Man Utd fan, replied: “You really think I wouldn’t say it to your face as well? Grow up. And don’t come that pious ‘hard-working journalists’ crap just because the nasty man has upset you.”

You really think I wouldn't say it to your face as well? Grow up. And don't come that pious "hard-working journalists" crap just because the nasty man has upset you. https://t.co/5cKYXAD4fA

Mike’s initial “idiots” comment was itself included on the live blog, in a post rounding up various Gloucestershire residents’ reactions to the news. 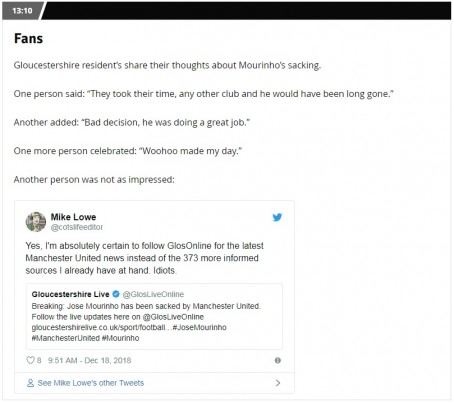 On Twitter, the site’s breaking news editor Phil Norris told Mike: “We’re not upset. Just disappointed that you use this kind of language to journalists in public.”

Mike responded: “What? Idiots? I never realised I was dealing with such a bunch of shrinking violets. Anyway, I’m off to lunch with someone far more sweary than me.”

Gloucestershire Live has declined to comment further on the exchange, while HTFP has also approached Mike for a comment.