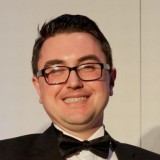 A daily football writer who left his role for a new job this month has been named Regional Journalist of the Year at the British Sports Journalism Awards.

Chris Wathan, formerly of Media Wales, won the prize at a ceremony held in London yesterday – the same day he began his new job with BBC Wales.

Neil Allen, from Portsmouth daily The News, and Mark Douglas, from Newcastle daily The Journal, were highly commended in the category.

The awards, run by the Sports Journalists’ Association, were presented at a ceremony attended by more than 500 guests.

Chris told HTFP: “It’s a lovely way to sign off from my time at Media Wales where I always felt proud and privileged to work and cover some great times in Welsh football. I’ve been spoilt with some of the stories on the patch and with the support I’ve had from colleagues to tell them.

“The messages I’ve had since have been quite overwhelming and left me smiling after a great evening. It’s always quite inspiring to see some of the sports journalism produced throughout the year highlighted on the night.

“And it’s great the SJA recognise the work in the regional media too.The shortlist was full of top writers and I’m genuinely thrilled to have edged it on this occasion.”

In his acceptance speech editor Matt Christie, who was also highly commended in the Specialist Sports Correspondent category, paid tribute to the memory of boxer Scott Westgarth, who died after winning his contest on Saturday.

Of the magazine’s win, Matt said: “It was a stunning result,when you consider the might and resources of those we were up against, and a real honour to get some recognition, from the highest possible place, for the tireless and excellent work we put in.”