Ex-colleagues launch own paper to fight ‘erosion’ of local journalism

Two former regional press colleagues who shared concerns about “the slow erosion of valued local journalism” have launched their own local newspaper.

Simon Hacker and Matthew Bigwood founded the Wotton Times to serve the Gloucestershire town of Wotton-under-Edge, despite being told they would be “mad” to do so.

The duo worked together in the 1980s and 1990s at the family-owned Bailey Newspaper Group in nearby Dursley, before Simon moved to freelance for national papers and magazines, while Matt built a career as a professional photographer and videographer.

Two issues of the monthly Times, which has a print run of 4,000 and has a cover price of 50p, have now been published, with Simon serving as editor and Matthew as creative director. 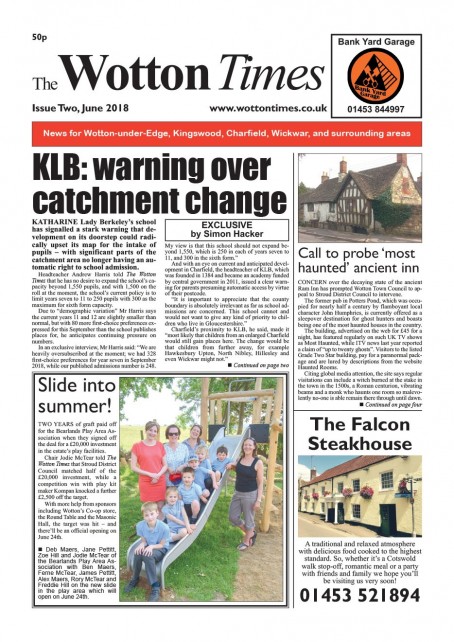 Explaining the decision to reunite for the project, Simon told HTFP: “We got sick of hearing ourselves lamenting career and industry inertia.”

He added: “Neither of us stopped twitching about the slow erosion of valued local journalism. We formed a publishing company in March.

“Weatherbeaten colleagues told me we were mad, that local journalism is dead because no one wants it any more, that there’s no money, blah, blah, blah. I’m annoyed I didn’t challenge this nonsense before.

“Truth is, local news is as much part of the resurgence of local culture as local fruit and veg. In fact, we sell stacks of our paper in a local produce shop. They devour it.”

Simon said the decision to be a paid-for title had made prohibitive print costs “less scary than imagined”, although most revenue comes from advertising.

Pagination increased by four from issue one to two, and plans are afoot to open a sister title, with possible staff expansion also on the cards too.

Simon said: “Perhaps what makes it work so well is that fact that although the financial pointers are good, we do this because we live and breathe local. I had a complaint from the local district council this morning about a lead story. That’s just the feedback we like.”

Offering advice for others thinking of launching their own newspaper, he added: “First of all, have faith. Build a local paper bursting with real news, not cut-and-paste handouts and releases, and they will come. And don’t be afraid to engage with new readers who might never have had a rapport with a traditional local paper.

“Don’t dumb-down stories with cliched journaleese, insist on names for people in pictures and, as well as delivering engaging and juicy stories, take the effort, as Matt does, to get out of the office and actually be there, for events no matter how small.