An editor who ran a weekly newspaper for more than 30 years has died aged 73.

Lionel Cowin worked as a journalist for four decades, mostly on the Isle of Man.

Lionel edited the Isle of Man Courier, and its forerunner the Ramsey Courier, from 1973 to 2005.

From 1993 until his retirement in 2005, Lionel also edited the Isle of Man Examiner and Manx Independent.

He was diagnosed with acute leukaemia in early April of this year, but despite winning his battle with the disease, he died in the early hours of Sunday morning after contracting an infection.

The Examiner honoured Lionel by publishing his photograph on its front page on Tuesday. 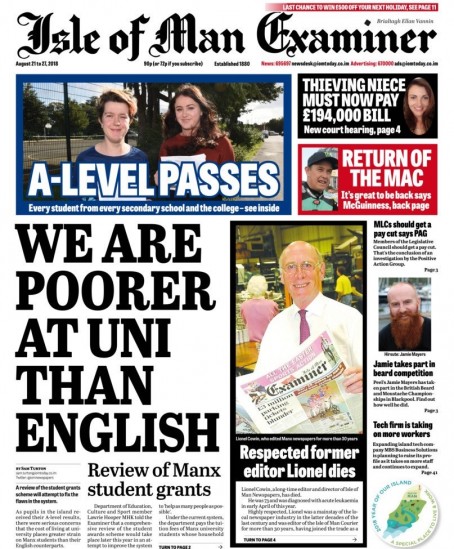 Lionel began his career as a junior reporter with the Examiner in the early 1960s and took over as editor of the Courier in 1973, after a brief spell working in Hertfordshire.

An obituary run by the Examiner states: “[Lionel] played a major role at the centre of an expanding group under Ramsey-based businessman John J. Christian. For a while, this included the island’s only Sunday publication, Sunday News, and also took over the established Mona’s Herald in Ridgeway Street, Douglas. In 1987, following the 13-week strike that brought an end to rival H. L. Dor’s Isle of Man Examiner/Weekly Times business in Hill Street, Lionel took over the editorship of the Examiner when it was bought by Halifax Courier.

“The Yorkshire company had bought the original Ramsey Courier and Mona’s Herald titles in the late 1970s and turned the Courier into an all-island free delivery publication. The rapidly-expanding business, which then became known as Isle of Man Newspapers, moved into the current purpose-built site on Peel Road, Douglas, early in 1993 and soon after bought the Manx Independent to form the current line-up of Isle of Man Courier, Isle of Man Examiner and Manx Independent.

“Lionel was editor of all three titles for the next 12 years until he retired in 2005. He had a huge passion for cycling and was Isle of Man team manager at several Island and Commonwealth Games in the 1980s and 1990s.

“An avid and accomplished rider himself, Lionel cycled up until shortly before his diagnosis in the Alicante, Spain, where he and wife Jean had spent the last three winters, making many friends of various nationalities.”

It adds: “The management and staff of Isle of Man Newspapers convey sincere condolences to Lionel’s wife, Jean, son Richard, daughter Emma and their respective families. At the time of going to press, no funeral arrangements had been announced.”