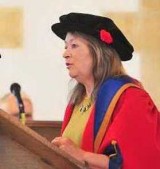 An editor who qualified as the UK’s second female football referee after being ridiculed for reporting on matches is set to retire after almost 48 years in the regional press.

Anne Edwards, left, has spent the past 16 years with Archant’s Norfolk publications, latterly as editor of the Great Yarmouth Mercury, Lowestoft Journal and Beccles & Bungay Journal, and also as a news editor on the Eastern Daily Press and Norwich Evening News.

Anne has previously held senior roles at newspapers across the country, editing her first titles in 1987 and serving as deputy editor and also acting editor at Newcastle daily The Journal.

She will retire at the end of May, one month shy of 48 years in full-time journalism, and has described her current role as “the dream job to take me to retirement – editor of the Great Yarmouth Mercury weekly newspaper – a job at the seaside”.

Said Anne: “The last 16 years in Great Yarmouth have been some of my happiest as I was able to train and mentor young journalists and see them fly – sometimes with a few tears and hugs when they left. One of my proudest moments was being made a Fellow of the University of Suffolk for my links with its campus in Great Yarmouth. This from someone who hadn’t been to university.

“Despite falling newspaper sales – there is still a need for local community news to be published, with many charities, groups and organisations continuing to send in reports and pictures of their activities and all are published. My creed is it people are good enough and take time to send in contributions then they will appear in the newspaper and on our websites. In fact, we are getting more than ever emailed in.”

Anne began her journalism career aged 17 as a junior reporter on her local weekly paper, the Melton Mowbray Times, in 1970.

She spent 17 years there, including six as a sports reporter, later going on to work as a photographer and as news editor.

Because of the “ridicule” she received while covering football matches for the Times, Anne qualified as a referee with the Leicestershire and Rutland County FA in 1972 – the first woman to do so in the county and the second in the whole country.

In 1987, she joined Post Newspapers in Northamptonshire as editor of four weekly free titles, going on to become group editor.

Following redundancy joined the Peterborough Evening Telegraph as a sub-editor and later production editor, before moving again four years later to become night editor and chief sub at The Journal.

She later became assistant editor for production and deputy editor, as well as spending a short time as acting editor before moving to Norfolk.

Anne said: “I will be remaining in Yarmouth, I have many interests and friends here, but my life in journalism is not over: I am joining the town’s Harbour Radio station to train the many community reporters and photographers, and advise on the station’s social media sites. It seems the most natural progression as I wind down and it also prevents me from the totally alien concept of housework, gardening and food shopping full-time.

“Each newspaper and job title has forced me to think through different problems before reacting – something which doesn’t come naturally – with the most challenging probably being the Geordie-dominated Journal. Howay the Lads. But I hope I gained the respect of those I worked alongside.”