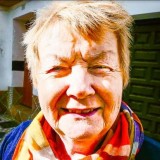 An editor who defied medics to spend her last days at home has died aged 63 after a three-year battle with blood cancer.

Tributes have been paid to Jackie Gaynor, pictured, who began a career in journalism in a bid to combat her own shyness and ended up editing the weekly newspaper where she started out.

The cancer she had been diagnosed with three years ago returned more aggressively just before Christmas, and she was in hospital for three months prior to her death.

Three days before she died, Jackie decided to defy medical advice and return to her own bed at the home she shared with her husband Carl in Ramsbottom.

Said Carl: “I was with her at the end. She opened her eyes and looked at me, then closed them and her face became peaceful as she slipped away. She was just a beautiful person and it was a joy to know her. I was a very, very lucky person to meet her.

He added: “She could always see the light side of life. People who worked with her throughout her career as a journalist would say the same – I never heard one bad word against her.

“She went into journalism to confront her shyness, she always had that feeling of taking a big step to meet people but it never held her back. She fought it by being more outward, by reaching out to people.

“She could always see both sides of the story, even if she didn’t agree with it.”

Born in Cheadle, Stockport, where her parents Bill and Kay Brookes ran a retirement home, Jackie joined the Wilmslow Advertiser, later the Express and Advertiser, in 1972, aged 17.

She later became chief sub-editor at the Stockport Express, before returning to Wilmslow as editor in 2002.

Jackie declined her own office and chose to sit with the reporters, training dozens of reportersover the course of her nine uears in charge.

She retired in 2011 after almost 40 years in journalism.

Colleague and close friend Pat Hills told the Manchester Evening News: “She never took herself seriously and couldn’t understand those who did. She adored her job and was the most conscientious and hard-working person you could meet.

“She always gave people the benefit of the doubt and on many occasions she got through to those who resolutely refused to talk to the press. They trusted her.

“I can barely imagine life without Jackie in it. She was a wonderful friend for almost 45 years and I loved her like a sister. She will be missed by so many people.”

Jackie is also survived by daughters Chole and Hayley. Her funeral took place at Manchester’s Blackley Crematorium yesterday followed by a wake at The Puss in Boots, Stockport.