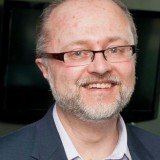 A senior regional editor says his company’s core print titles will exist “for a long time to come” despite having “crossed the Rubicon” of digital development.

Marc Reeves, left, told a panel discussion on the future of the media that industry chiefs had had to “design a digital lifeboat” due to traditional consumption of news fading.

Marc, who is editor in chief of the Midlands operation of Reach plc, oversaw a restructure of the Birmingham Mail’s newsroom which saw the newspaper’s digital team made independent from its print team earlier this year.

The move led to the Mail being rebranded as ‘Birmingham Live’ online.

Speaking at the discussion, hosted by the Birmingham Press Club and BBC Midlands, Marc said: “Traditional consumption of news has faded. We had to design a ‘digital lifeboat’ – and we have crossed the Rubicon. Perhaps we should have done it years ago.

“Our core print titles will be here for a long time to come, but we realised our digital growth was major.

“This involves a cultural change for the commercial side of operations but I have every reason to be optimistic for the future. In fact, I am feeling very chipper.”

He said: “A few years ago it almost felt as though the West Midlands had fallen off the map. But now there is very much a sense of renewed confidence and optimism.

“There are lots of challenges ahead but there are also opportunities and if Channel 4 relocates to the region that would be great. It would give us our own Media City.”