An editor has issued a front page plea to Sajid Javid to reverse a “farce” which saw a former mayor of his newspaper’s patch have her application for British citizenship rejected.

Ipswich Star editor Brad Jones has called for the Home Secretary to perform a U-turn on the “scandalous” decision to deny citizenship to Inga Lockington, who served as a councillor in the Suffolk town for 19 years.

Mrs Lockington, a Liberal Democrat councillor for 19 years and mayor of her adopted town 10 years ago, is Danish, but married Dr Tim Lockington in 1979 and has lived in Ipswich ever since.

Brad’s call came yesterday, a week after the Star first broke the story. 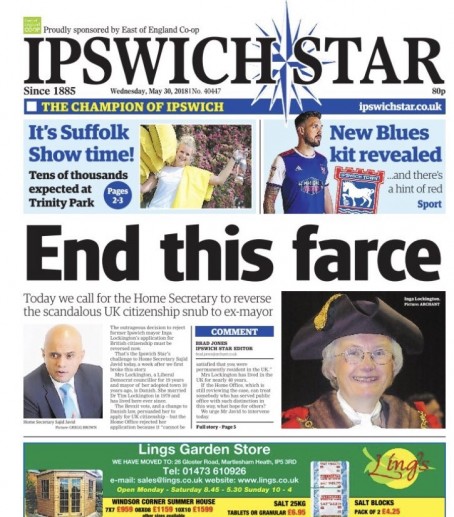 He wrote: “The Brexit vote, and a change to Danish law, persuaded her to apply for UK citizenship – but the Home Office rejected her application because it “cannot be satisfied that you were permanently resident in the UK.”

“Mrs Lockington has lived in the UK for nearly 40 years.

“If the Home Office, which is still reviewing the case, can treat somebody who has served public office with such distinction in this way, what hope for others?

A spokesman for the Home Office said Mrs Lockington’s case would be concluded “as soon as possible”.

He added: “The fact that we contacted her at the end of last week to find out the relevant dates for us to look for documents and that we have called her again today shows that we are keen to sort this case out as soon as possible.

“Everyone is keen to ensure we reach a satisfactory conclusion to this as soon as possible but at this stage we cannot really give a final timescale but we are aware you are likely to hear about it when things are all sorted out.”