Executive editor leaves publisher after 26 years to ‘try something different’ 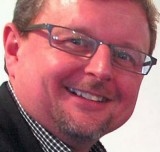 A senior editorial executive has left a regional publisher after 26 years – saying it is “time to try something different”.

Dave Lafferty has left Manchester Evening News publisher MEN Media, where he has been responsible for leading the company’s print team over the past five years.

Dave, left, was editor of his hometown newspaper the Macclesfield Express, also part of MEN Media, from 2005 to 2009.

In more recent times he has held titles at Reach plc-owned MEN including associate editor, executive editor and head of communities.

His departure comes amid a major restructure of the MEN’s print operation which will see it merged with that of sister title the Huddersfield Daily Examiner.

The two titles’ print operations are to be combined under a single regional unit, with seven jobs set to go in Huddersfield alongside a small increase in staffing at Manchester.

Dave told the Express: “I’ve had a wonderful career and I’m proud to have been involved with the Macc Express for all these years.

“The Express has been the voice of Macclesfield for more than 200 years and I’m sure it’ll be around for a long time to come.

“I’m very proud of how we’ve continued to hold the powers-that-be to account and helped raise money for some wonderful causes such as East Cheshire Hospice and Macmillan Cancer Care.

“The successful Hands off Our Hospital campaign was another highlight for me. The Express is in the hands of a very capable editor in Gareth Tidman.”

Dave began his career at the Express as a trainee reporter in 1992 under long-serving editor Doug Pickford.

In 1995 he became sports editor, and was promoted to deputy editor five years later.

He became group development editor in 2003, and was then appointed Oldham Advertiser editor in November of the same year before returning to his hometown in 2005.

Earlier this year, the MEN was voted Daily Newspaper of the Year at the Regional Press Awards and its print team also came out on top at the O2 Media Awards North West.

Dave added: “I’ve been immensely proud to lead the print team at the Evening News over the past five years and I’ve worked with some incredibly talented people.

“I’ll miss the buzz of the newsroom but it’s time to try something different.”