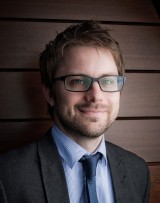 A regional daily editor has announced his departure from the newspaper after four years in charge to pursue “new career opportunities outside the regional media.”

The 33-year-old took over as the Herald’s editor in December 2013, following Ian Wood’s departure.

Before that, Paul had spent six months in charge of the Exeter Express & Echo, and served as head of content at Bristol-based daily the Western Daily Press between 2006 and 2013.

In a farewell message on Twitter on Friday, he posted: “Thanks to everyone who has read and supported the Plymouth Herald – my last day today, thanks to my fantastically hardworking and talented team. It’s been challenging, rewarding but always wonderful to work with you all. Good luck.”

In a statement, he added: “My time at The Herald has been an incredibly rewarding experience and I think we’ve proved that local newspapers have ample life, fight and creativity in them. I couldn’t have wished to have worked with a better team of journalists and I will miss working with them.

“I’m particularly thankful for the way the newsroom has stuck by my ideas and direction through a time of great change in our industry – change we have always tried to underpin with strong, influential and passionately local journalism.

“The time is right for me to do something else in my life now, but I’ll leave with great confidence in The Herald’s future.”

Among those to wish Paul well was former Trinity Mirror commercial director Blanche Sainsbury. She posted: “Good Luck Paul – your talent will a huge loss to the business. Onwards but no doubt upwards.”

Chiara Giordano, the Herald’s former head of content, added: “Such a shame you’re leaving Paul – you were a great editor to work for. Good luck for whatever you do next.”

Trinity Mirror Devon and Cornwall editor-in-chief Bill Martin said: “Paul has been a key member of our senior management team and his departure is a huge loss to the business.

“He has been key to ensuring that the Plymouth team has been at the forefront of newsroom transformation and his work on the Herald website has been critical in creating a digital news publishing platform he should be very proud of. He has been a great leader of a rapidly developing team, an unrelentingly hard-working journalist, and a very good friend.”

A Trinity Mirror spokesman said: “Paul Burton has stepped down from his role as editor of the Plymouth Herald in order to pursue new career opportunities outside of the regional media.

“A new editor will be announced in due course.”