A regional daily editor has welcomed the announcement of a new warship bearing the name of the newspaper’s patch.

HMS Sheffield was hit by an Argentine Exocet missile in the early stages of the Falklands War in 1982 with the loss of 20 lives.

Last week defence minister Stuart Andrew announced that a new Type 26 frigate to be built on the Clyde would be named HMS Sheffield – the fourth vessel to bear the name.

Sheffield daily The Star splashed on the announcement on Friday and editor Nancy Fielder spoke of her “absolute joy” at the news, which followed a city-wide campaign backed by the paper. 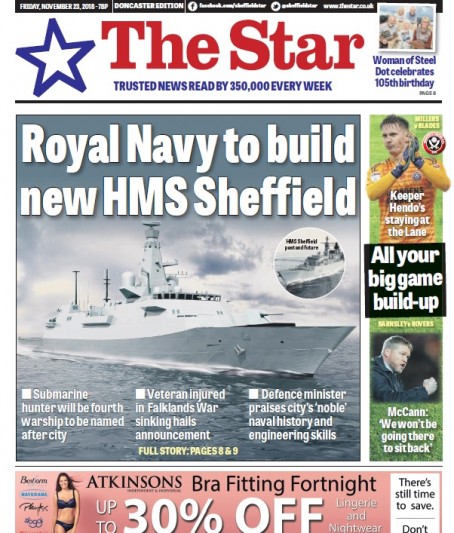 In an editorial, she wrote:  “There it is. The front page that this city has waited so long to see. She is finally on her way back to us … HMS Sheffield.

“It is hard to describe the emotional connection so many people here have with HMS Sheffield – the stories behind the headlines live on in thousands of hearts. That is why we now welcome the fourth vessel with absolute joy.

“Everyone in Sheffield should know the history of our historical links with the Navy, but this gives us another chance to shout about it.

“From the bottom of our heart, this city wishes the very best to HMS Sheffield and all who sail in her.”

The second HMS Sheffield was the first British ship to be lost in enemy action since World War Two and the first of four British ships to be sunk by the Argentine air force in the Falklands conflict.

Following the strike, the ship was engulfed by flames and eventually abandoned but it did not sink until it was being towed away from the Falklands almost a week later.

A third HMS Sheffield was launched in 1986 but was sold to the Chilean Navy in 2003 and renamed the Almirante Williams.

All eight of the new Type 26 frigates will be built on the Clyde and based at Devonport Naval Base in Plymouth. The first, HMS Glasgow, is due in service in the mid-2020s.