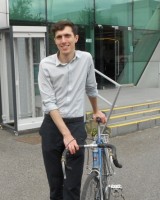 An editor has defended the way his newspapers report on road crashes after criticism over how they refer to such incidents in stories.

Ramzy Alwakeel wrote an editorial on the subject after the Hackney Gazette and Islington Gazette received “some stick” over their coverage of a collision between a lorry and a bicycle which caused a cyclist to have her leg amputated.

Among those to criticise the Gazettes was pressure group Stop Killing Cyclists, which described their coverage as “dreadful”.

The group claimed on Twitter that the usage of the term “collide with” in the story implied that both parties were using similar speed and force.

In an editorial responding to the criticism, Ramzy said he was “curious as to what everyone else thinks we should have done”.

He wrote: “One criticism centred around whether we were right to refer to the incident as a “collision” or should have chosen more active language such as ‘run over’. There was also the perennial debate about whether it is correct to say a driver hit someone or a vehicle did, with people on soap boxes saying we were brushing the accountability of drivers in general under the carpet by making it sound like a cement truck could hit people without being driven by someone (of course this can happen but I accept it’s not the norm). Stop Killing Cyclists went to far as to call our attempt at neutrality ‘dreadful’.

“From my perhaps ignorant point of view, the argument is semantic: the only thing a driver can hit is the inside of a car, so it is the car itself that hits something. Nothing more insidious than that dictates our choice of language. Of course drivers are responsible for cars – but do readers really need telling that?

“What has given me pause for thought is that I do believe drivers should bear responsibility for the hugely more dangerous vehicles they operate, and this isn’t always borne out by, for instance, convictions and sentences. So if we can do anything to remind people that they might be better off not driving anything then I want to know what it is.”

Ramzy, pictured, told HTFP: “The difficulty is knowing to what extent it really is prejudicial or unfair to list one party before the other, or to say ‘collided with’ rather than ‘was in collision with’ – you’re taught to use these supposedly safer, more neutral terms but I’m not sure who they really help.

“You’re not going to jeopardise a trial or libel anyone by doing one rather than the other, and it’s likely both parties are going to be upset regardless of what you print.

“Even if a collision isn’t a driver’s fault it’s still virtually always true that more than 50 per cent of the impact is the doing of the larger vehicle because of its larger mass even if not necessarily higher speed. So on that basis I will definitely consider relaxing the knots we sometimes tie ourselves in.

“The bottom line is if people want to suggest alternative ways we can word our stories I’ll always listen to them. But there is a reason we do things a certain way, even if that’s open to challenge – and it isn’t because of an agenda besides that of not getting stuff wrong or being sued/taken to IPSO.”