The Liverpool Echo has made a front page plea to readers to help find how best to commemorate Sir Ken Dodd following the comedian’s death aged 90.

The Echo splashed today on a tribute to the “local legend”, who died on Sunday, and called on readers to send in their ideas for how the city of Liverpool could pay tribute to him.

Suggestions touted by the Echo in its front page comment piece include an event, a street or theatre name, or an awards night.

It also jokingly suggested a giant version of his trademark “tickling stick” be put up on Everton Brow, in Liverpool. 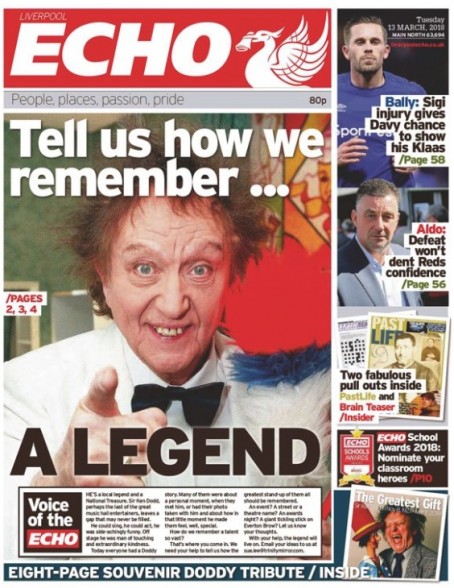 Echo editor Alastair Machray told HTFP: “Doddy is a local legend and a national treasure as we said on page one today. It’s important we commemorate a great talent and a great life by ensuring Sir Ken’s name lives on forever.

“He was a creative genius in a city of creative talent – we can’t wait to see what our readers come up with.”

Blackpool daily The Gazette also gave over today’s front page in tribute to Sir Ken, with the newspaper describing the resort as his “second home”.

The Gazette’s splash featured an image of a “tickling stick” by one of Sir Ken’s most famous quotes on the Comedy Carpet, an attraction on the seafront by Blackpool Tower made up of panels on the ground featuring famous lines from comedy history. 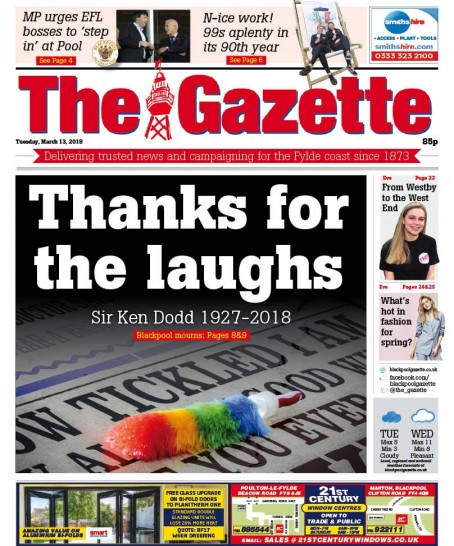 Deputy editor Andy Sykes said: “Sir Ken Dodd was very much a Liverpudlian but his second home was surely Blackpool. He is thought to have appeared in Blackpool more than 2,000 times during summer season shows, plus more recent tours.

“So much so he was asked to officially open the Comedy Carpet – an art installation on Blackpool Prom in front of the Tower which features some of his best jokes – in 2011.

“We had scores of pictures of Doddy in our archive but our challenge was to create a unique front page and I hope it has raised a smile to honour a man who brought years of joy to Blackpool audiences.

Tributes to Sir Ken further featured on the front page of the Flintshire edition of North Wales daily The Leader.

The newspaper said he had “brought joy to audiences across North Wales”. 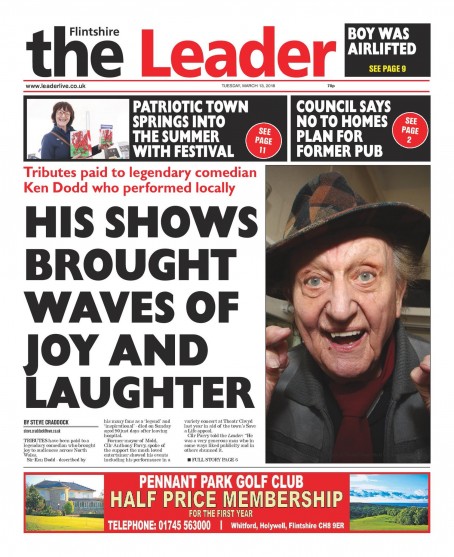