Dyson at Large: Why local weekly’s pornography splash made me cringe

It was a tweet from John Harris, a reporter at The Guardian, that first drew my attention to a local paper’s splash that frankly made me cringe.

“I live in a county whose council is close to financial meltdown,” said John, who was named UK political commentator of the year at this year’s Society of Editors’ Press Awards.

Surely not, I thought, and immediately requested my undercover agent who lives nearby to investigate the alleged edition of the Frome Standard on Thursday 4 October. 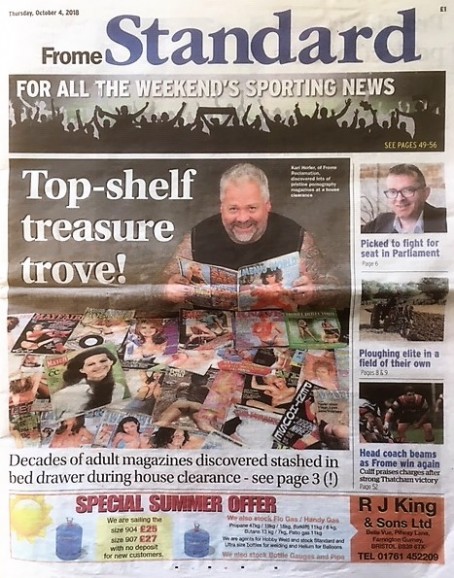 He sent me a copy (thanks, Charlie) and, as you can see, Harris’ incredulity was based on fact: the Standard had devoted its front page to the discovery of a huge pile of pornographic magazines.

‘Top-shelf treasure trove!’ screamed the headline, with the sub-heading ‘Decades of adult magazines discovered stashed in bed drawer during house clearance’ and the full story with close-up titillating pictures on – you guessed it – page three.

Can anyone out there imagine the response of their local editor if they’d tried to report this story back in the 1980s, 1990s or even the early 2000s? Arses would have been metaphorically kicked.

And yet in the Reach-owned newsroom, probably because the story pulled in the traffic online, the decision was not only made to use the sordid tale in print but to splash on it.

Without wanting to sound too old-fashioned, this is just not what local journalism in what’s supposed to be a family newspaper was ever meant to be about.

Harris, however, wasn’t quite right with his inference that the Standard was uninterested in politics, as turning inside there was:

The remaining audience for local newspapers is largely elderly, often in a family setting and interested enough to spend money on reading about local public affairs.

The last thing they want is a pointless story about piles of sleazy mags found in dusty drawers.

Fortunately, my faith in regional newspapers was restored by the amount of hard news, politics and decent light relief that the Belfast Telegraph is regularly cramming onto its front pages. 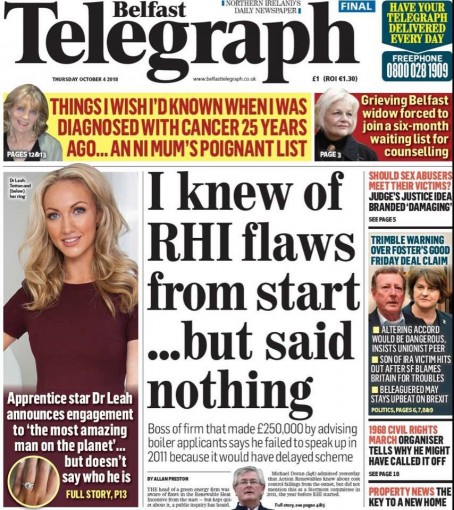 And there was a similarly high story count in the Independent News & Media-owned paper the day after:

“They seem to enjoy squeezing as much into the template each day as possible,” reported Alan, my Belfast-based spy, although he added: “Way too busy – gives me a headache trying to figure out where to start reading.”

Yes, there are multiple entry points, but based on the above examples I’d prefer to be paying £1 a day for the newsy Belfast Telegraph than the same price each week for what was a grubby Frome Standard.