Yes, I know, that wasn’t a headline you were expecting on a Dyson at Large blog, was it?

Johnston Press has attracted heavy criticism in recent years, and at times I’ve been one of the group’s toughest faultfinders.

But I feel compelled to praise the publisher today for backing the development of quality editorial.

My thoughts on this were sparked by watching how The Yorkshire Post’s investigation into absent MP Jared O’Mara caught the attention of much of the national press when it resulted in the politician’s almost immediate return to work.

This, I told myself, sounds like a confident paper that’s willing to hold people in power to account on behalf of its readers, and so I was prompted to get hold of a copy.

The O’Mara story had come and gone by the time I picked up the Post from Saturday 20 January, but I was still impressed by what I found in one of the UK’s few remaining broadsheets.

‘NHS failings hit dementia care support’ was that day’s splash, one that I reckon would have grabbed the attention of the paper’s readers (some 45,000 on Saturdays).

This was a neatly regionalised version of national data, with analysis and local comment that also filled most of page six.

Then came more than 80 stories and one-and-a-half pages of race cards in a 12-page ‘SportsWeekend’ section, with a 24-page tabloid ‘County Week’ carrying another 50-plus reads on farming, the outdoors and rural life.

There was also an eight-page broadsheet ‘PropertyPost’ and an eight-page tabloid ‘Motoring’ section, but the real gem of The Yorkshire Post on Saturday was ‘The Magazine’. 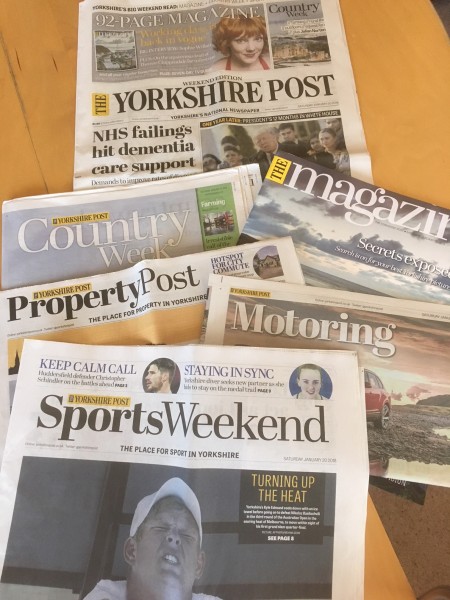 For £1.90, I felt editor James Mitchinson and his staff were delivering a paper that was better – and on Saturdays a solid pound cheaper – than the sadly diminished relaunch of The Guardian.

And then, as I was tapping out this blog on Monday, yet more quality editorial from Johnston Press caught my eye, but this time from across the UK.

‘Revealed: Frightening number of children caught with knives in schools’ was the online headline from The News in Portsmouth, which told how “weapon offences in Hampshire schools have more than doubled within four years”.

A good enough tale by itself, but what really caught by eye was how this was a Johnston Press Investigations story, resulting from inquiries “together with our sister paper the i”.

I quickly looked around, and here are just few examples of what I found from the same investigation at other Johnston Press titles

What a fabulous example of how a nationally funded investigations unit can create highly relevant local stories across a regional publisher’s entire portfolio.

There are still emerging issues at Johnston Press that disturb me – most recently revealed in a HoldtheFrontPage story headlined ‘Publisher launches new central digital teams with creation of 31 jobs’ on 18 January.

There was nothing wrong with that, but I was disturbed to read the following in the last paragraph of the story:

Publishers must, of course, offer new forms of advertising, and UK journalism has always had what we used to call ‘commercial features writers’.

But Johnston Press would be mistaken if it blurred the line between editorial and advertising too much, as this would damage the great progress in quality journalism that editor-in-chief Jeremy Clifford and his team are achieving, as exemplified above.

What’s now called ‘sponsored content’ must always be treated as completely separate to the main editorial department, or else companies funding these adfeatures will soon start demanding the exclusion of embarrassing revelations in other parts of the paper.

I’m sure the commercial bosses at Johnston know this, but there’s no harm in reminding them. I hope Trinity Mirror, Newsquest, Archant and others take note too.