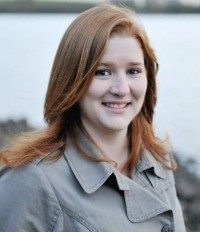 Claire Wilde, crime reporter at the Yorkshire Post, Tom Kershaw, chief reporter at Ross Parry News Agency, and Hull Daily Mail crime reporter Lucy Leeson were initially told on the first day of the Humberside Police hearing they would not be allowed to attend unless they signed an agreement undertaking not to publish the officer in question’s name.

However, the ban was removed at the end of the hearing after Claire , with the backing of the other two journalists, sent a letter to hearing chair Simon Mallett asking him to lift the order.

Detective Constable Emyr Davies was sacked by the force after he falsely claimed to have reviewed CCTV footage in relation to a rape investigation, although he was cleared of two other allegations against him.

Claire, pictured, wrote in her letter: “We are writing to request that the panel considers authorising the naming of the police officer in the event that misconduct is found to have occurred.

“We consider that this is in the interests of transparency.  It would demonstrate the openness of police misconduct proceedings and show that individual officers are held accountable for their actions.

“I believe that it is clearly in the public interest that the tribunal hearing should be reported in full, and pursuant to the well-known principles of open justice, the officer concerned should be identified if the misconduct charges are prove.”

Mr Mallett subsequently ruled that DC Davies should be named as it was important that the proceedings were “open and transparent.”

Claire told HTFP:  “The public has a right to know when police officers are sacked for gross misconduct, so the panel made the right decision by lifting its anonymity order in this case.

“Openness and transparency should be standard in this type of hearing.”

Tom added: “There was no legitimate reason to hide the blushes of this police officer who had failed to locate two suspects and a rape victim on CCTV footage.

“Being able to name and shame this officer is welcomed by the press and should be something that was given the go-ahead from the outset.

“Police misconduct hearings on a whole are becoming more and more well-attended by members of the press and all we ask is for further transparency from the forces who host them.”

A Humberside Police statement reads: “An original order made by the legally qualified chair Simon Mallett, which had prevented him from being named was reviewed at the conclusion of the hearing, when Mr Mallett ruled that Mr Davies should be named as it was important that the proceedings were ‘open and transparent.'”