A “delusional” murderer who stabbed his ex-girlfriend to death has accused a regional daily of running a “smear campaign” against him in a letter to the newspaper.

Jason Cooper was jailed for 31 years earlier this year for the murder of Laura Stuart, who he killed in August 2016 after she ended the abusive relationship he had subjected her to.

Now Cooper, who stalked at stabbed Miss Stuart before kicking her “like a football” as she lay dying. has penned a letter to the North Wales Daily Post from prison after losing an appeal against his sentence, claiming he is not a “monster or manipulator”.

His victim’s family have hit out as his claims to the Daily Post, describing him as “delusional and disrespectful”. 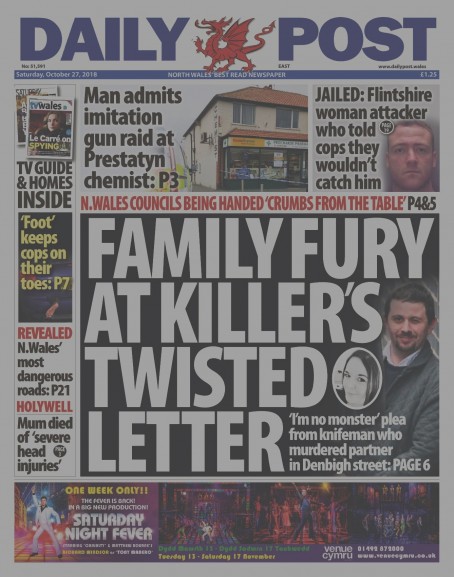 In his letter to the Post from HMP Altercourse, in Liverpool, Cooper wrote: “I’m not in the habit of contacting journalists or writing to newspapers but I feel the time couldn’t be more right given your constant barrage of articles and the smear campaign you have set up against me.

“I’m prepared to give you an opportunity to actually hear the actual truth of what happened in August 2017. All I have read in your newspaper about myself over the last 16 months has peaked my interest, so much so that I’m willing to speak with you and to give you the opportunity to print the real story, and not the hearsay and fantasy stories that [Miss Stuart’s mother] Elizabeth Griffiths has dreamt up.

“Trust me there are no innocent parties involved in this tragic event which ruined so many lives. I also feel it is only right that my family who have, will and always will support me actually speak my truth.

“Anyone who knows me or has got to know me in prison can’t relate to what you print in your newspaper as it appears you’re talking about a Jason Cooper who’s another one of the fabricated characters made up by Elizabeth Griffiths. I can assure I’m no monster or manipulator as that woman would have people believe.”

He added: “I can also assure you of my deep regret and remorse and the sadness that I will forever hold in my heart due to my actions on 12/8/17 and my part in what was a once loving relationship turned toxic by a number of factors and people.

“I look forward to your reply or not, until then I would suggest you do your research thoroughly and you will realise I’m in fact 28 and not 31. I look forward with great interest into reading the next installment of the Elizabeth Griffiths fiction and fantasy tales.”

During his attack on 33-year-old mother-of-two Miss Stuart on 12 August last year, Cooper also stabbed her friend David Roberts as he tried to defend her.

His trial defence that he had a drink problem which caused him “abnormal mental functioning” at the time of the killing took a jury just 55 minutes to unanimously reject.

Speaking to the Post, Miss Stuart’s brother Rory rejected the claims made in his letter.

“His claim that ‘people that have got to know him cannot relate to what has been written about him’ and his claim that ‘Elizabeth Griffiths has fabricated his character’ is utterly ludicrous and quite frankly delusional.”

He added: “Jason Cooper was found guilty of all offences committed on August 12, 2017, and subsequently had his sentencing appeal rejected. What he did that evening is a diabolical crime which no person should be the victim of. He has shown zero remorse for his actions – has not once apologised for the heinous crime committed.

“Any mention my mum is fabricating him as a different character is truly outrageous and disrespectful. As a family we want to move on with our lives but we will never forget what he did.

“We will continue as a family to fight for justice and support those who are victims of domestic violence.”

Daily Post Editor Andrew Campbell told HTFP: “Jason Cooper was convicted of a heinous crime that devastated a family and shocked a community.

“We, like his victim’s family, were appalled by the twisted contents of the letter he wrote to us and we felt it was important to share his apparent lack of genuine remorse with our readers.

“Our thoughts and sympathy as ever remain with the family and friends of his victim Laura Stuart.”