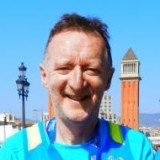 A regional daily’s longest-serving reporter has retired after 40 years with the newspaper – and almost half a century since his first journalism job.

Eric Baxter has left the Greenock Telegraph after a career which saw him report from the Falkland Islands, as well as break a story which prompted a national scandal.

Eric, pictured, revealed that thousands of cervical smear tests had been misread at Greenock’s Inverclyde Royal Hospital, and a Department of Health report published in 1997 later showed more than one in three laboratories where such tests are examined failed to meet national standards.

He also had a column, called The Way I See It, in which he “shared his common sense views, advice and humour”.

Eric, who turns 65 this month, said: “I am very proud to be part of the Tele and I will miss it. The paper is a vital part of the community and plays a really crucial role.

Glasgow-born Eric’s first job in journalism was at 16 as a copy boy with the Scottish Daily Express.

He had been inspired to follow in the footsteps of his father Alex, a freelance reporter covering news and sport who died when Eric was just 13.

Eric initially worked as a showbiz reporter covering TV and films and was assistant letters editor.

After leaving the Express he worked with Radio Clyde on writing and producing commercials, before joining the Telegraph.

Brian Hossack, the 10th editor under whom Eric served in Greenock, said: “In such a turbulent industry, to work at one place for 40 years is a remarkable achievement.

“Eric embodies the Telegraph in that he is trusted by Inverclyde and has served its people with vigour, diligence and verve during a distinguished career.”