A regional daily could leave its historic office for smaller premises with some staff set to be relocated more than 30 miles away.

Newsquest has confirmed it is looking for an alternative to the current North West Evening Mail offices in Abbey Road, Barrow.

Although the publisher has insisted the title will retain a base in the town, a number of staff are set to be relocated to the offices of sister title the Westmorland Gazette, in Kendal, in a move which could also see some working remotely.

Newsquest has so far declined to clarify which staff are affected by the plans, which were unveiled on Friday.

A Newsquest spokesman said: “We are reviewing our buildings which are in some cases no longer fit for purpose and looking for an alternative more cost-effective office in Barrow. In our modern newsroom reporters are armed with the latest technology so are able to work remotely on patch.”

But a suggestion by local MP John Woodcock that the paper could leave Barrow altogether were branded “complete cobblers” by the publisher. 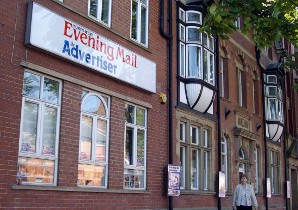 Posting on Twitter, Mr Woodcock wrote: “Shocked to hear [The Mail’s] new owners have launched consultation to downsize or even shut the historic Abbey Road office. [Newsquest], did you plan on asking the town’s views? Barrow’s paper needs to stay in Barrow.”

Newsquest North managing director David Coates responded: “I can confirm any suggestion of The Mail leaving Barrow is complete cobblers. In fact we’re hiring more reporters there – if anyone is interested, please get in touch.”

Mr Woodcock replied: “Sorry David, are you accusing me or your staff of lying? I take a pretty dim view of that. I don’t think you’ve ever taken the time to introduce yourself? Happy to speak if you have the time to pick up the phone.”

The reporting vacancies in Barrow referred to by David in his tweet are currently being advertised on HoldtheFrontPage.

Jonathan Lee, managing director for Newsquest’s former CN Group titles, told staff of the changes in an announcement which has been seen by HTFP.

He wrote: “As you know the company has brought together the former CN Group companies with its existing publishing operations in Kendal to form Newsquest Cumbria. We are now considering the most effective structure to adopt within Newsquest Cumbria, to help place the business on a sustainable and profitable footing.

“To this end I can confirm that the company is proposing to make changes to the current operations at Barrow and Kendal. If adopted, the proposed changes will result in some staff who are currently based in the Barrow office being based in our offices in Kendal and/or working remotely, possibly from home.

“The proposal will enable us to make efficient use of all the resources available, taking advantage of our investment in new technology.”

A formal consultation on the company’s proposals began on Friday with a collective consultation meeting due to take place tomorrow.

The proposed changes would be introduced over several months, with those initially affected relocating to Kendal around 6 August.

The shortest driving route between Barrow and Kendal is 33 miles, with the journey taking around an hour.

Since buying the CN Group in March, Newsquest has oveseen the closure of the Carlisle printing press with the loss of 34 jobs, the introduction of a voluntary redundancy scheme for non-reporting roles, and plans to axe up to seven staff photographer roles.