Regional daily staff donned sporting shirts for a World Cup-themed fundraiser in aid of a charity founded by a journalist at a sister newspaper.

Journalists at the Lancashire Evening Post and The Gazette, Blackpool, raised £160 for Joseph’s Goal after taking part in the ‘Wear your football to shirt to work’ day on Tuesday.

The charity was set up in 2012 by Paul Kendrick, sports reporter at fellow Johnston Press daily the Wigan Post, after his son Joseph was born with the condition three years previously. 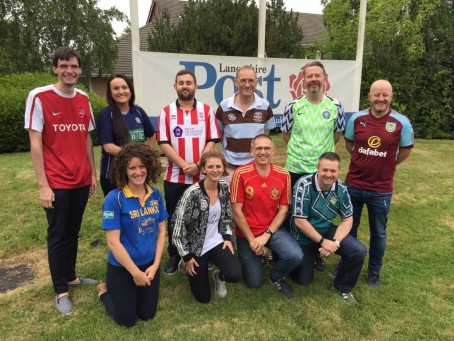 Peter Storey, Johnston Press North West sports editor, told HTFP: “The idea originally came from our Burnley reporter Chris Boden so all it took was a bit of rallying round the Lancashire Post office.

“Members of the editorial and newspaper sales staff have managed to raise £160 so far for a charity which is close to our hearts.

“The Wigan Post are holding a similar event next week and hopefully we can raise even more funds for Joseph’s Goal.”