The Northern Echo has marked the day with extensive coverage in print and online in a bid to highlight gender inequality.

As part of its coverage, the Darlington-based Echo has run a story on the gender gap in the number of male and female councillors in the North-East of England.

It has also run piece from women in the fields of politics, business, sport, justice, public services to give a “fascinating snapshot of their experiences, and what they believe needs to change to achieve true equality between the sexes”. 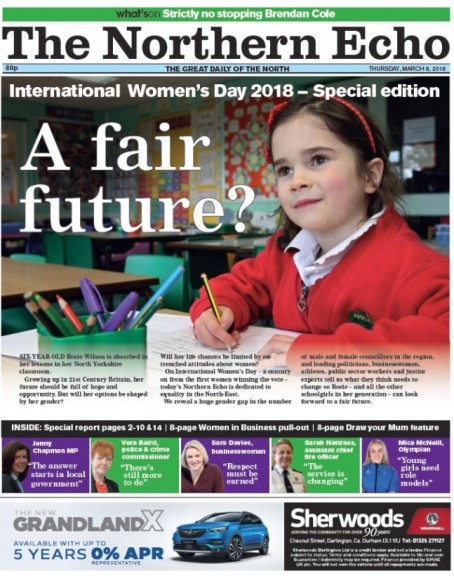 An editorial on the special edition states: “The question we asked in the Northern Echo newsroom when we sat down to plan today’s edition – a special equality-themed paper for International Women’s Day, 100 years on from women winning the vote – was: Does it matter?

“The answer, we believe, is yes it does matter. It matters a lot. If women are not fairly represented in all these arenas, then a vital perspective is lost, priorities can be wrongly set, and crucially, the bodies responsible for vast areas of public life are in no way representative of the communities their decisions affect. The country loses out if women’s voices are not heard. We have given the first 11 pages of today’s paper over to a series of interviews with women from the region.”

It concludes: “Whether Twitter hashtags can create the environment for sustainable change which reaches all sections of society, remains to be seen. But the more light that is shed on these issues, the more chance there is that things will be different – and better – for future generations of women. In publishing this edition, that is our aim.” 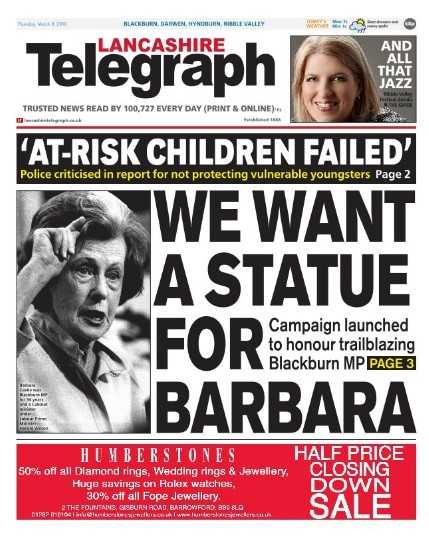 The Lancashire Telegraph has also marked the day by calling for a statue of former Labour Cabinet Minister Barbara Castle to be erected in Blackburn.

The former Blackburn MP and life peer, who died in 2002, held five high-profile government posts and as Transport Minister introduced the breathalyser, confirmed the 70mph maximum speed limit and legislated for seat belts on new cars.