The Oxford Mail has publshed a special edition dedicated to Sir Roger Bannister following the record-breaking athlete’s death at the age of 88.

The Mail ran the five-page tribute yesterday after Sir Roger’s death was announced on Sunday.

The athlete was the first person to run the mile in under four minutes – setting the record at Oxford’s Iffley Road Sports Ground in 1954.

Sir Roger later became a leading neurologist and has been described as ‘Mr Oxford’ by the Mail. 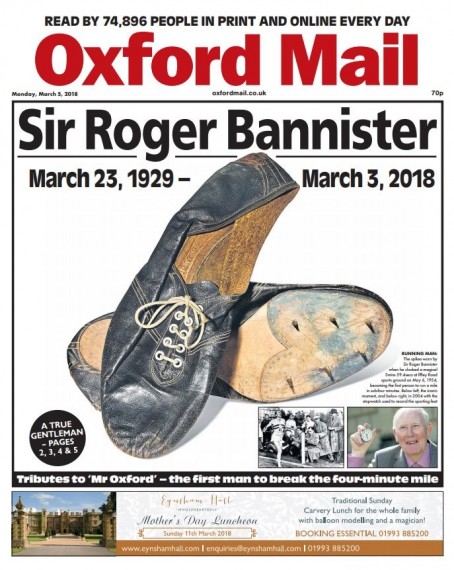 News editor Mike Benke told HTFP: “Sir Roger Bannister was a true icon of Oxford and his fantastic achievements at Iffley Road Sports Ground has inspired many athletes in the city to take up the sport.

“Away from the track, he achieved a great deal in the field of medicine which started in Oxford. It was only right therefore to turn over the front five pages of the paper to him.

“As well as many great pictures, including the image of the spikes Sir Roger ran the historic four-minute mile in, there are many tributes from local running groups and other figures in the city.

“The team did a great job of getting good reaction quotes at short notice to pull the paper together, with several coming in on their day off to put the edition together. We have also had many comments from readers who understood what a great man he was.”