A daily newspaper has run a follow-up on two sisters from remote islands almost 70 years after first covering their story.

The Scotsman reported in 1949 how Kristina Djurhuus, then 26, and her sister Valdis, then just 16, were enjoying a visit to Edinburgh from the Faroe Islands.

The siblings had moved from the Faroes, an autonomous territory of Denmark 200 miles north of Scotland, after accepting jobs on the Fair Isle bird observatory, between Shetland and Orkney.

They had landed by boat at the Scottish capital to avoid the worst of the winter weather, and lived initially at the Fair Isle Bird Observatory Trust’s headquarters. 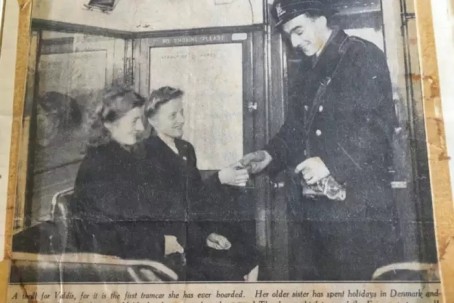 The initial Scotsman story from 1949

Kristina married a Scottish lighthouse keeper in 1950, while Valdis later returned to her homeland where she subsequently raised a family.

Kristina’s daughter Irene Miller, who lives in Perth, arranged a nostalgic trip to Edinburgh when Valdis arrived in Scotland for a visit, and Scotsman reporter Chris McCall was there to cover the nearly seven-decade-old follow-up.

He told HTFP: “It was a real privilege to meet Kristina and Valdis almost 70 years after they first appeared in The Scotsman. It’s not often as a journalist you find a new angle on a story that’s older than your parents.

“But Edinburgh is the kind of place that once visited, it’s never forgotten. You would be surprised how often people from around the world react with delight when you mention you work for the paper – people associate it with the city and their happy memories of it.”

Irene told Chris: “I think the original story must have been arranged by George Waterston, who founded the observatory on Fair Isle.

“He was keen for more people to go and stay there. The story of the sisters coming down to work from the Faroes would have interested Scots as many were stationed there during the Second World War.”