Daily questions whether seagull has vendetta against its reporters

A regional daily has questioned whether a seagull has a vendetta against its reporters after two were injured in bird attacks over the past two years.

The Worcester News has reported that its journalist Sebastian Richards was left with a scratch on his hand and robbed of the steak bake he was eating by a gull last Monday.

It follows a similar attack in April 2016, which saw News reporter Jessica Charles bitten on the hand by one of the birds while eating a biscuit.

Both attacks took place on Angel Place, in Worcester city centre, prompting the News to run a story with the headline ‘Is there a seagull with a grudge against journalists in Worcester?’ 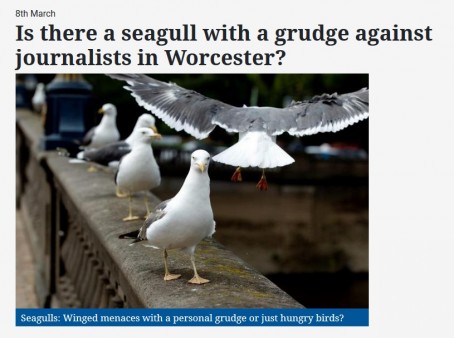 Unsurprisingly, the answer turns out to be no, with the story’s un-named author admitting that it was “unlikely it was the same seagull,” even though they can live for up to 49 years and are known to have long memories.

However the writer does point out that, while News staff are unlikely to have been the victims of an “anti journalist vendetta,” the newspaper has regularly carried stories on council plans to cull the birds

“The latest attack has once again raised the issue of what should be done to reduce the number of gulls in the city,” says the report.

“The city council spends thousands of pounds a year on trying to tackle the seagull problem, paying a contractor to place fake eggs on roofs to deter gulls from leaving real ones, among other measures.

“Still, the problem of the gulls persists, and the city’s residents want a solution that works.”