Journalists from across the country lent support to staff at the Leicester Mercury as they covered a football helicopter tragedy on their patch.

The Mercury and its sister website Leicestershire Live have won praise for their handling of Saturday night’s crash outside Leicester City FC’s King Power stadium, which claimed five lives – including that of the club’s chairman Vichai Srivaddhanaprabha.

Mercury staff worked through the night, filed copy from holiday, came in from leave days and slept in the office in order to keep readers informed, while journalists from other titles across the country volunteered to offer support over the course of the weekend. 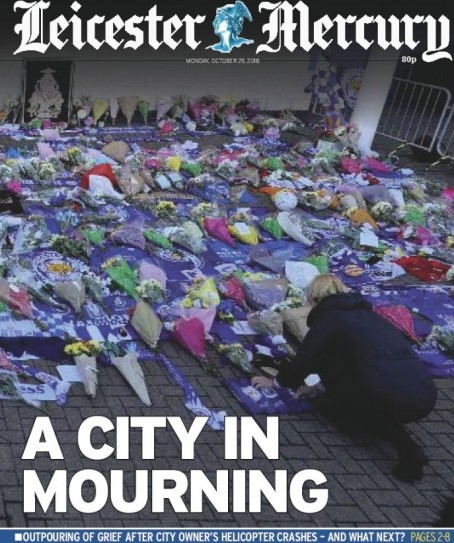 Editor George Oliver told HTFP: “The most important thing today is to send the condolences of everyone at the Mercury to all those affected by Saturday’s tragedy.

“Our staff were experiencing the same shock and grief as everyone else in the city over the weekend. They are supporters of Leicester City and the people of Leicestershire. Despite this, they remained focused on doing everything in their power to make sense of what was happening for our readers.

“My colleagues worked through the night, filed from holiday, came in from leave days and slept in the office as we all tried to understand what had happened and reflect the mourning taking place in the city.

“Further to this, we had several staff members from other titles around the country call in to offer their support. We accepted and were grateful for their assistance.

“I’ve had city leaders contact me over the weekend in praise of how we handled this tragedy. We did our best. We will obviously be continuing to do so in coming days, weeks and months.”

The tragedy occurred around an hour after City’s home match against West Ham United, which was the first game to be covered by Mercury reporter Jordan Blackwell in his new role as its Leicester City correspondent.

Jordan’s move to his new role came after his predecessor James Sharpe recently left the Mercury to join the Mail on Sunday.

George added: “I am proud of all the staff involved but in particular Jordan Blackwell, who was completing his first matchday as the Mercury’s new Leicester City correspondent.

“Jordan is himself a City supporter yet he remained composed and professional throughout. He personified the response of all of his colleagues.”