A regional daily is petitioning the government in a bid to get fairer funding for schools on its patch.

The Star, Sheffield, is urging Prime Minister Theresa May and Education Secretary Damian Hinds to intervene after it revealed last month that pupils in the city are among the worst funded in England.

The Star and its Johnston Press sister weekly the Sheffield Telegraph are working with Sheffield Council, not for profit organisation Learn Sheffield and the city’s MPs, among others, on the issue.

The Star splashed on the petition’s launch yesterday, with the Telegraph following suit today. 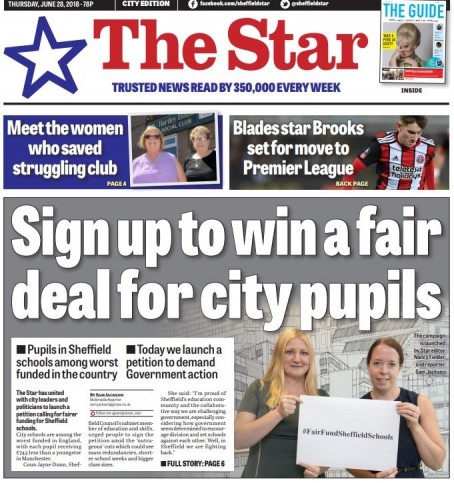 In a message to readers, editor Nancy Fielder said: “No school in Sheffield will escape the impact of this terribly unfair funding, which is why headteachers are also fighting for the city as one.

“We are working with Sheffield City Council, Learn Sheffield, the city’s six MPs, businesses, schools, community groups and individuals on this but we need more help.

“Use whatever medium and influences you have to make everyone realise how unjust the funding is, then join us in tackling it.

“The more names we get on the petition, the more powerful we are and the louder our voice will be heard.”

The Department for Education said the purpose of the new funding formula is to correct historic disparities in the funding system, which involves redistributing funding to historically underfunded areas.

A spokesman for the department added that schools in the Sheffield area will attract an increase in funding of 6.6pc – equivalent to £20.4 million – when the national funding formula is implemented in full by 2021. 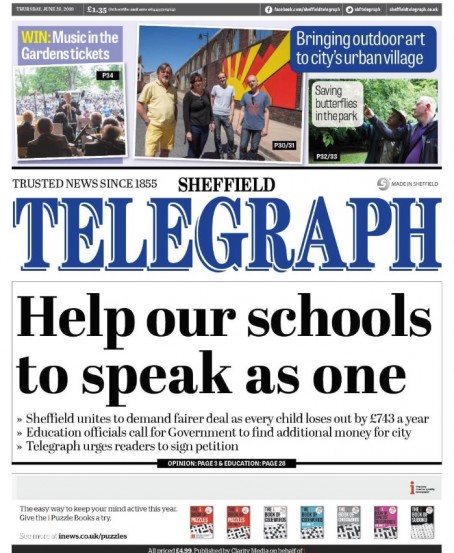