A regional daily has paid tribute after a “much-loved” volunteer at the newspaper died aged 77.

The Lancashire Telegraph has honoured Gordon Roocroft, who helped out with “odd jobs” at its Blackburn office.

Gordon, who had learning difficulties, was described as a “good man with a cracking sense of humour”.

A front-page tribute to him appeared in Monday’s edition of Telegraph following his death from sepsis last week, 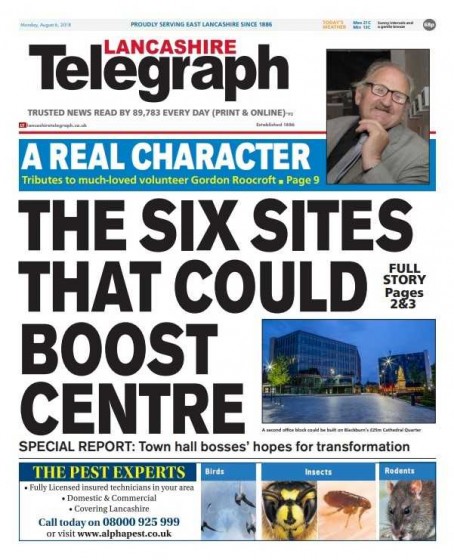 Lancashire Telegraph audience and content editor Roger Airey said: “Gordon was loved by everyone at the Telegraph. He would spend most days helping out with odd jobs around the place and soon made himself indispensable.

“He was friends with everyone in the building and would spend hours walking around chatting to everyone, putting smiles on people’s faces.

“He was friends with everyone from the people on reception to the editor and managing director. He was a real part of the Telegraph family and everyone will miss him greatly.”

“He valued friendships. I had known him for 30 years and he always had a nickname for everyone in the building. I was Dingle [a nickname for people from Burnley] because of my passion for the Clarets [Burnley Football Club]. And when Burnley got beat I knew who would be standing by my desk when I arrived at work to unmercifully remind me of the score.”

Gordon spent his teenage years in Brockhall Hospital, an institution for people with learning disabilities.

He later moved to Accrington and worked for Accrington Brickworks before moving into the Blackburn Salvation Army, where he remained for more than two decades.

Telegraph business editor Jason Kayley said: “Gordon was an absolute legend. He had a great sense of humour and always had a smile on his face. He loved the Lancashire Telegraph.”

Sue Haworth, who worked at the Telegraph for around 30 years, added: “He always wanted to help people. He was known for having a nickname for everybody, irrespective of their status in the building.”