A regional daily dreamed up a fairytale front page to mark two major events on its patch.

The Western Daily Press covered Prince Harry and Meghan Markle’s visit to the University of Bath for the Invictus Games trials, while on the same day the Man Engine tour visited the nearby village of Radstock.

The Man Engine, currently being toured around the country, is the largest mechanical puppet ever constructed in Great Britain, and is operated by a dozen handlers.

In tribute to both events, the Bristol-based Daily Press opted for the headline ‘Beauty and the beast’ with pictures of both Ms Markle and the Engine on Saturday’s front page. 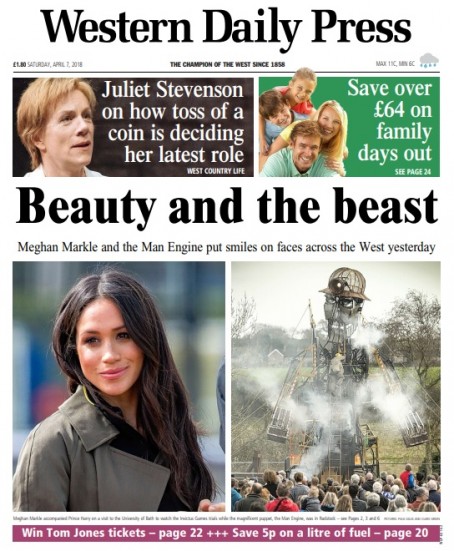 Editor Gavin Thompson told HTFP: “We had two big events taking place in the West just a few miles apart as Meghan and Harry visited the University of Bath for the Invictus Games trials and the Man Engine tour came to Radstock in Somerset, which makes great pictures.

“Our news editor Tom Murdock came up with a headline that captured both in one, so we decided to have a bit of fun and put the two images together resulting in a front page that I hope made some of our readers smile.”