A regional daily has marked 10 years since a maritime disaster on its patch by landing an exclusive interview with the captain of the stricken ship involved.

The Gazette, Blackpool, has run a week-long series of stories recalling the story of the Riverdance, a ferry which ran aground during a storm on 31 January 2008.

Ahead of the anniversary, deputy editor Andy Sykes challenged senior reporter Michael Holmes to track down Jim Smith, who captained the Riverdance.

Speaking publicly for the first time about the disaster, Mr Smith told Michael the ship had been “very close” to capsizing with all 23 passengers and crew still on board.

Despite a successful rescue, the ship remained stricken on the beach at Cleveleys, north of Blackpool, for the best part of a year. 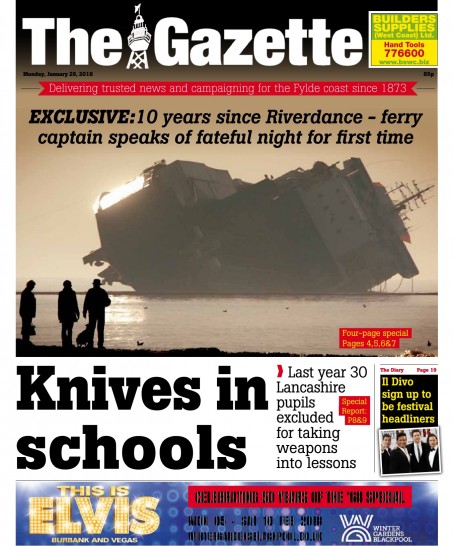 Said Andy: “Our Riverdance special has been six months in the planning and Michael Holmes has done an amazing job to provide 20 pages of coverage over six days this week. I challenged him to get hold of the ship’s captain who has never before spoken about the rescue and that fateful night of seeing the ferry broadsided during a storm.

“He did that and more and has done an outstanding job chronicling the rescue, the unexpected tourism boom for Blackpool and Cleveleys, the demolition operation and the official report into what happened and who and what was to blame. When we promoted our week-long coverage over the weekend the response was overwhelming and many couldn’t believe it was 10 years since it happened.”

Memories from journalists who covered the disaster at the time – including current Gazette reporter Shelagh Parkinson, former reporter Rob Stocks and photographer Rob Lock – have also featured in the newspaper’s coverage.

Andy added: “It brought back a lot of memories and the archive pictures we had just show what a monumental event this was and continued to be for months after. It’s one of those events in history that our readers will never forget and I am immensely proud of coverage once again.

“Dean Mellor in the [Johnston Press] Sheffield subbing hub has designed the majority of these pages for us and his skilled designs have really brought the story to life too.”