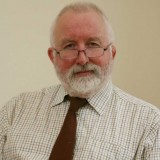 A veteran daily journalist has warned that newspaper websites may “never be loved” in the same way their print counterparts once were as he bows out after 46 years in the industry.

Jeremy Lewis, left, is leaving the Nottingham Post today after almost 37 years at the newspaper – during which time he worked on stories including the miners’ strike and the Kegworth air crash.

Positions he has held at the Post include chief reporter, opinion editor, features editor and editor of the newspaper’s sister magazine Nottinghamshire Today.

He has also written the Post’s leaders for most of the last 30 years.

Jeremy told HTFP: “I was fortunate to have worked through the last of the provincial industry’s prosperous years. In the [Nottingham Forest FC manager] Brian Clough era the Post, then a family-owned independent, sent its Forest reporter on European Cup away legs aboard the company jet.

“I can remember when news editors would eye up a cautious expenses claim and growl: ‘You’ll have to do better than that, sonny!’

“That’s all gone and it’s too late for whingeing. I’m a newspaperman, not a digital specialist. At 65, I struggle with my mobile phone, never mind website software.

“It’s the right time to go. I’m not sure if websites will ever be loved in the way that provincial dailies were once loved, but I hope everyone strives to make them authoritative and respected.”

Jeremy began his career in Kent, training on the now defunct Ashford Advertiser and then working as a senior reporter at the Kent Messenger Group at Ashford, Gravesend and Chatham.

He joined the Nottingham Post as chief reporter in 1981 after a brief spell on the Newark Advertiser, later joining the news subbing team in 1983 and working shifts on the Football Post.

He has also served as a columnist, theatre critic and the paper’s restaurant reviewer Food Sleuth, and more recently returned to feature writing after his spell editing Nottinghamshire Today.

Jeremy added: “I’d lived the first 26 years of my life south of the Thames, so I thought I’d have a brief adventure in what I then believed to be the north of England.

“I was surprised not to hear the skirl of bagpipes in the distance, but I fell for Nottingham, and for the Post. I stayed and I’ve loved almost every minute.

“As a reporter or news sub I wrote or handled copy on stories as big as the miners’ strike and the Kegworth air crash. I then shifted towards features and other things. The variety of opportunities given me by editors such as Barrie Williams and Mike Sassi has helped keep me fresh.”

Jeremy will now be taking on a limited amount of freelance work, including restaurant reviews for the Post, but hopes to find more time for hill-walking and watercolours.