Daily holds alternative World Cup as nations get together on patch

A regional daily marked the start of the football World Cup by celebrating an alternative version of the tournament it hosted on its patch.

HTFP reported last month how the Bristol Post’s Tristan Cork was challenged to find one person in Bristol from each of the 32 competing nations, with the aim of organising a meet-up before the first ball was kicked in Russia yesterday.

After appealing online, potential representatives came forward for the ‘Bristol World Cup’ from many of the countries involved – and a get-together was organised at the city’s College Green on Sunday afternoon. 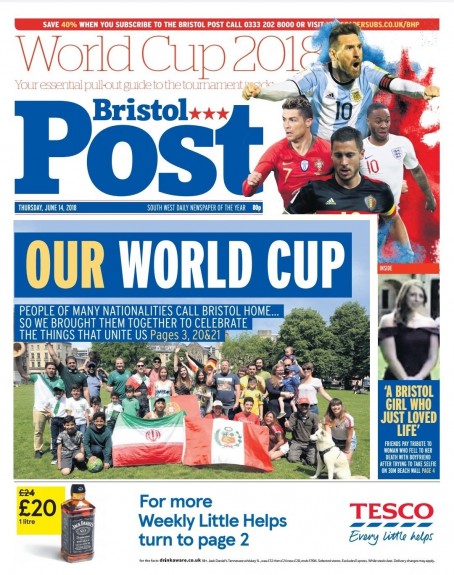 In a piece reflecting on the challenge, Tristan wrote: “France bailed the day before, Denmark on the morning. We never got a sniff of someone from Serbia, or Panama. It was too late to find replacements, but we went ahead anyway.

“And it was just glorious – those who stepped forward with a mixture of bemusement and love were people who went from names on an email list to fully formed human beings with a cheery smile and a welcoming handshake. They came with football shirts, with big flags, with small flags, with hats, with scarves.

“Three families of Saudi Arabians came, a chap originally from Senegal brought his niece and nephews with their Senegal shirts and Bristolian accents.”

Tristan added the “best part” had been observing friendships between different nationalities develop as the day progressed following the formalities of interviews and photographs taking place.

He concluded: “We asked them all what they liked about Bristol and they mentioned the harbour, the architecture, the green spaces, the pace of life, how creative the city is. But all of them said the same thing – that the people here were lovely.

“That they felt welcome. That the city was great because it was so diverse, and that it felt like a great ‘splash of colour’.

“And, after they gathered for a team photo, and the adults carried on chatting, a game of actual football broke out – the kids from the Saudi families put shoes down for goalposts and played with the kids from Senegal via St Paul’s, and the young land from Cordoba in Spain.

“Those children, whose origins and languages span three continents, all communicating in Bristolian and the language of football.”