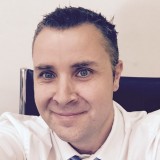 A daily newspaper editor has criticised regional broadcast news after plans for a new television channel on his patch were scrapped.

Martin Tideswell, left, who edits Stoke-on-Trent daily The Sentinel, has claimed regional TV does not offer viewers “the kind of service which they would like” in comparison to his own outlet.

In the case of Stoke and North Staffordshire, Martin has claimed television viewers are more likely to see news items about Birmingham or Manchester than where they live.

Earlier this week broadcast regulator Ofcom scrapped plans to award new local TV licences in 13 towns and cities. Stoke was among the 13 areas to find out it would not be getting a licence.

In a Sentinel piece about the announcement, Martin said: “There is no doubt that regional TV – in its current form – does not offer viewers the kind of service which they would like.

“Very little of the output is local to the area and viewers here in North Staffordshire are more likely to be shown news items from Birmingham or Manchester than they are about Stoke-on-Trent, Newcastle-under-Lyme, the Staffordshire Moorlands or Stafford Borough.

“The reality is that there is only one media locally which attends court hearings daily, council meetings, and works around the clock seven days a week to bring local news to people in the Potteries and surrounding areas and I’m very proud to say that is The Sentinel.”

The other areas affected by Ofcom’s decision are Bangor, Kidderminster, Bromsgrove, Stratford-upon-Avon, Barnstaple, Limavady, Derry/Londonderry, Inverness, Luton, Plymouth, Gloucester and the Forth Valley.