A regional daily has celebrated 20 years since the opening of a children’s hospice it helped build in memory of Princess Diana.

The Northern Echo has marked two decades since the opening of Butterwick Hospice, in Stockton-on-Tees.

There was no specialist hospice for children in the North-East of England at the time and the Echo wanted to create “something positive” in the Princess’s memory.

After Echo readers helped to raise the required cash, the hospice was opened in September 1998 by Take That’s Gary Barlow. 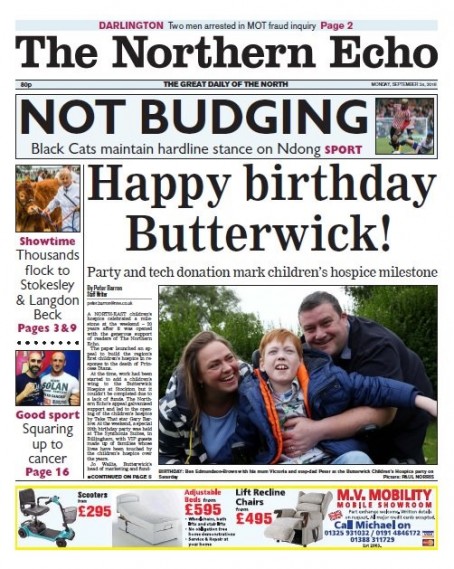 The anniversary provided a splash for the Darlington-based Echo last week.

Editor Hannah Chapman told HTFP: “In the aftermath of Princess Diana’s death, the Northern Echo, then edited by Peter Barron, was determined that there should be something positive created in her memory. The North-East didn’t have a children’s hospice at the time, so the Butterwick project seemed like the perfect opportunity.

“When we launched the appeal to raise the funds needed, our readers responded with overwhelming generosity. It is testament to their commitment, and that of the volunteers and staff who give so much to the hospice today, that it is still going strong 20 years later.

“We are so proud of our connection to Butterwick – it shows what can be achieved when local newspapers and the community work together.”

Jo Wallis, Butterwick’s head of marketing and fundraising, said: “If it hadn’t been for the generosity of the readers of The Northern Echo 20 years ago, we may not be celebrating this milestone, but the need for that support hasn’t gone away.

“Providing round-the-clock care for children and their families is costly so every pound donated is hugely appreciated.”