A viral Facebook post which claimed a rough sleeper had frozen to death on a city’s streets has been exposed as fake news by a regional daily.

The Leicester Mercury stepped in after the mainstream media was accused of ignoring the “story” which continued to be shared by thousands of people even after the newspaper had confirmed its inaccuracy.

The Mercury discovered, following checks with the police, Leicester City Council and homelessness charities, that although the ‘dead’ man featured in the post was a rough sleeper in Leicester, he was alive.

In a story debunking the post, the paper said it had been shared by some social media users “complaining that the country was spending huge sums of money on foreign aid while rough sleeping was such a big issue at home.” 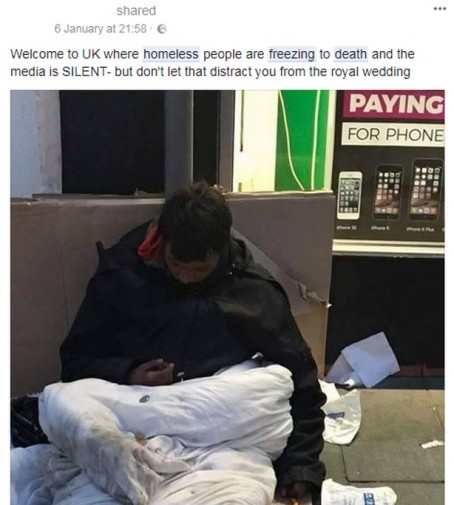 A screenshot of the fake post exposed by the Mercury

Mercury politics correspondent Dan Martin told HTFP: “We knew it wasn’t true and therefore there was no story to be written. But even after we’d taken some time to establish the facts we watched the post continue to get shared again and again and again – mostly in good faith by people who were genuinely shocked by it.

“Inevitably comments started to appear that the media, not the Mercury specifically, were neglecting to cover an important story or worse were somehow part of a conspiracy to actually cover it up.

“That notion was frankly daft. We have reported on the deaths of rough sleepers whenever we have found out about them and sadly we’ve actually covered a case in Leicester since this post went viral.

“The council too were – unfairly in this particular case – getting some stick over something that simply hadn’t happened. It had also had to go to some effort to get to the bottom of this, taking up time and energy that could actually have been spent helping rough sleepers.”

Arif Voraji, of Help the Homeless Leicester,  told the Mercury: “A guy with right wing views shared it and that got it spread round even more – though a lot of people did challenge him and a lot of the posts got taken down.

“It just goes to show how easy it is for false stuff to be shared on social media and why you have to be careful with it.”

Leicester City Council issued a statement confirming there was no truth in the post, following a request by the Mercury.

A council spokesman said: “We are aware of this post. This has been investigated and there is no truth in the claim.”

Added Dan: “It was just a one liner but it was enough that we were able to run a piece setting the record straight.

“The story been well received but shared nowhere near as many times as the fake post. That is a little depressing but a lot of people have at least since deleted the fake post even if it is still there to see.

“Facebook, Twitter and other social media are now absolutely essential to reporters, and councils, as sources of information but there’s a lot of garbage circulating on them.

“A lot of it can and should be ignored but sometimes it’s necessary to call out the fake stuff which is what we’ve done in this case.”